For a moment, Peter did something that only two people in history have ever done.  He actually walked on water.  But then got frightened when he took his eyes off of Jesus and allowed his fear of his physical circumstances to overwhelm him.  Fear is a debilitating emotion.  All too often, it overwhelms and causes us to doubt and withdraw from God.  But fear is not the opposite of faith.  Faith is a choice we make, fear is an emotional response to circumstances.  We may choose to give our faith less foothold in our life as fear creeps in, and I believe that is what happened to Peter. 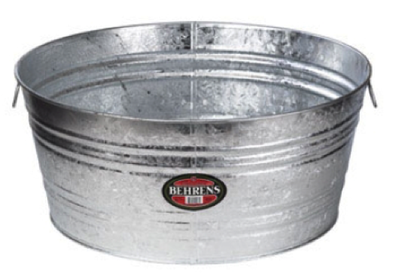 Milk is a unique substance.  It is an opaque liquid.   Its chemical composition reflects nearly all of the light that hits it and very little transmits through even a relatively thin layer of the substance, making it an excellent and cheap material for this demonstration.  The idea is to have this all set up before anyone else arrives.  I typically fill the tub with as much cement block and brick and stone as possible to limit the number of gallons of milk I have to buy.  As I place the filler block materials, I strategically leave a “hole” in the center of the tub large enough that I can easily push a measuring stick into the tub and “prove” to those watching that the tub is filled with milk and anyone who might step into it would sink immediately straight to the bottom. The idea is to place the tub absolutely level, and then fill it with milk to just cover the top of the filler blocks, leaving a very thin milk covering.   As people come in, I usually look for someone who might be wearing a very nice pair of sneakers.  That individual will be my target volunteer.  I usually have a secondary backup if necessary.

I ask if my volunteer would like to learn to walk on milk.  I would be glad to teach them the technique I have perfected.  They simply need to trust me and do as I tell them.  It takes some convincing, but many times they will come around and be willing to take a step of faith into the milk.  If they decline, I show them how it is done myself.  Of course they suspect what has happened, but the point is they cannot be absolutely sure, and it makes a great demonstration of trust.

We know of only one instance where Jesus walked on water, and it is recorded by three of the Gospel writers.  Only Luke omits mention of this moment in the life of Jesus.  As is often the case in the Gospels, each record of the incident includes unique observations concerning the event.  One must read all three accounts to get the entire picture here.  “It was a dark and stormy night” seems cliché, but it was a dark and stormy night.  I have been on the Sea of Galilee.  On a bright, sunny, windy day it was a formidable place.  I can only imagine what it must have been like for those disciples to be out there in the dark, on wind swept seas. This story unfolds in the wee hours of the morning.  These men had been up and awake since the day before, and were tired from fighting the swells and wind.

I sometimes wonder about God’s sense of humor, and I do believe He has one.  Mark tells us that not only was Jesus walking along on the water, but, he was about to walk right past them and continue on.  I see a bit of humor in that statement.  But they did notice Him walking along and cried out in fear.  He began to communicate with them and Peter came up with this wild notion that he should walk out to where Jesus was.  I have often wondered where that came from.  And Jesus told him to come.

Let’s stop right there for just a minute and talk about what has just happened.  Jesus has given Peter a direct command to immediately act and step out of the boat and walk over to Him.  I’ve got to admire Peter’s commitment to Jesus.  Peter knew good and well that it is impossible for a normal human being to walk on water, and yet Peter is willing to obey.  A bright, sunny, calm day is one thing, but in a raging wind storm in the black of night is quite another.  Reading the passages carefully, we find that Peter did not immediately sink.  We don’t know how far he walked, but he did travel a little distance at least.  What must that have been like for Peter to experience?

But he took his eyes off of Jesus and focused on the circumstances surrounding him, and doubted his ability to overcome this hurdle.  How often do we start something that we know is God’s will and plan, but when things get tough, we throw up our hands and say, ”This is impossible.”  Of course, it is impossible.  That’s why Jesus is involved.  He can do anything.  I remember the day my 4 year old son, in tears, brought his prized toy tractor out into the shop.  It was broken and his little heart was crushed because of it.  He handed the pieces to me and I set to work fixing the issue.  It took some time, but after an hour or so, I had the problem fixed and he was ready to play again.  He ran back into the house, smiling from ear to ear.  When I went in for lunch later that day, his mother informed me of an episode that she had just dealt with before I came in.  She had caught our son severely mistreating his toys, throwing one around mercilessly.  She stopped him and asked him why in the world was he playing like that, he should know better.  His response brought a hint of a smile to my face when he was quoted as saying, “Well, Daddy can fix anything!”  Needless to say, his proper care of his toys was addressed and that problem never reared its head again.  But God can fix and do anything.  He really can.  Jesus asked Peter why he doubted that fact.

Why do we doubt God?  That’s a good question.  I think of John the Baptist when I consider this issue.  Jesus had very high praise for his cousin.  He called John the greatest man born of woman.  That is a pretty high standard.  John had the responsibility and honor of announcing Jesus to the world.  He knew his role in God’s plan and performed his job admirably.  But then came the day that he approached Herod and condemned him for his immorality.  Herod had taken notice of his sister-in-law and wanted her for his own wife, so he forced his brother to divorce her.  Then Herod divorced his own wife and married his brother’s “now ex-wife.”  John the Baptist approached Herod and condemned him openly for his behavior, and John was immediately thrown into a dungeon.  In that dungeon, despair came calling and John began to question his life and his beliefs.  He had doubts.  His thoughts troubled his so much that he asked some of his closest friends to go to Jesus and ask one question.  “Are you really who you say you are?”

Jesus could have condemned John for his doubts, He could have gotten angry with John for his failure to believe, but He didn’t do any of those things.  Rather, Jesus proved one more time, just for John, who He was.  In one instant, in one brief moment of time, Jesus healed everyone within a wide radius of where He was standing.  Everyone at once!  He then looked at John’s messengers and simply said, “Go back and tell John what you just saw me do.”  God understands that we doubt.  It will happen to all of us.  Jesus didn’t get angry with Peter.  He pulled him up out of the water and the two of them walked over to the boat and got in.  Don’t ever forget that little bit of information.  They walked to the boat together.

Jesus will be there with us as well when we doubt, to pick us up, and walk with us the rest of the way.