And you also were included in Christ when you heard the message of truth, the gospel of your salvation. When you believed, you were marked in him with a seal, the promised Holy Spirit.  Ephesians 1:13

When discussing the truth about the Trinity, difficulties arise.  We have very little, if anything , with which to compare the concept of a Triune Being, three separate and distinct persons, that are One.  At best, this side of Heaven, we see dimly, through an obscured glass.  But we do have little snapshots, as it were, or glimpses, of the Divine Being.  And each little facet gives as a more complete picture of who God is and how He operates.  This verse deals with the fact that the Holy Spirit is a seal placed upon our lives to signify several things.  First, we know that we belong to the signatory—God.  Second, we are protected by Him, because of our position in His family.  And thirdly, that the Holy Spirit is a promise, or guarantee, of God’s promises towards us. 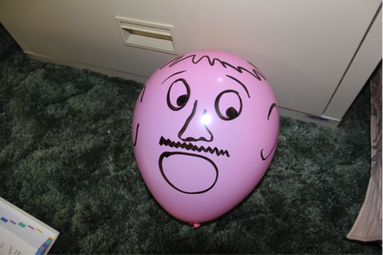 Essentially, you will blow up both balloons, tie them off and draw a frightened, or scared face on each with a magic marker.  One balloon is laid aside, the other receives a small piece of tape placed somewhere on the balloon.  During the presentation, the un-taped balloon will be popped with the pin.  The other will also be poked with the pin, but poked through the middle of the piece of tape.  The second balloon will not pop, but will lose air slowly, so I usually just leave the pin in the balloon to stop the flow of air, or at least slow it down.

After blowing up the two balloons, introduce them to the class.  I use the names Bill and Phil, two ordinary guys with ordinary problems.  Bill has been going through life just fine.  Things are going his way.  In fact, he has decided that he doesn’t need God in his life.  He can handle things on his own.  Phil on the other hand, understands that he is a sinner and needs a savior.  He has invited God into his life, and God has done something very special for him as a guarantee of His promises.  He has sealed him with the Holy Spirit.  You can place a piece of scotch tape on the balloon.  I point out that the tape is practically invisible, but a permanent part of the balloon now.  The Holy Spirit is also invisible, as He is spirit, and is also permanently attached to us.  He lives inside of us for the remainder of our lives on this earth.

Both balloons go on with life, each seeming to be getting along fine, for a while.  So let’s introduce real stress into their lives.  Bring out the pin.  Now the frightened look on the balloons faces makes perfect sense.  Pins are deadly to balloons.  Bill, who was confident that he could face all of life’s difficulties by himself, confronts the pin—and looses in a loud explosion.  Phil, on the other hand, approaches the dilemma frightened, but knowing that he has a personal relationship with an Almighty God and that God has given him a seal, The Holy Spirit.  When the pin is poked through the tape attached to the balloon, there is no explosion, and life goes on for Phil.  The stressful encounter was not much of an issue after all.

We as Christians can count on God to protect us in difficult times.  His seal, The Holy Spirit, will do just that.  By comforting, guiding, teaching, and constantly pointing us towards the example of the perfectly lived life—Jesus.

The word seal in Ephesians 1:13 can be used several different ways.  First, it can refer to the fact that the Holy Spirit is a seal or a guarantee of our relationship with God.  We become His child at the moment of salvation and that condition will never be reversed or changed in any way.  I had an occasion to see a private collection of wax seals, and was amazed at the intricacy of some of the more valuable ones.  I do know that one was a personal seal of Napoleon Bonaparte.  When he would write a letter, he would fold it over and put some hot wax over the exposed edge of the paper and then impress his seal into the wax.  It was a confirmation to the recipient that the letter was indeed authentic and that no one else had opened the letter before it got to him.  With the seal of the Holy Spirit upon our lives, there is no question as the authenticity of our position, or the future that we have been promised because of our salvation.  Heaven will be there for us to enjoy someday.  We can absolutely count on that.

Secondly the seal of the Holy Spirit shows that we are truly children of God.  It is an identifying marker, unquestionably telling all that are interested that we are not our own anymore, but belong to Him.  My father-in-law was for many years a cattle farmer.  He raised Black Angus cattle and had several hundred cows and calves in his herd.  Once in a while, an ornery bull calf or heifer would push against the fences and gain their freedom from the pasture.  And often a phone call from a neighbor would alert him to the problem.  You see, they could all look at the left hip of every one of his cattle and see his brand clearly against the black fur.  There was no question to whom the calf belonged.  He had a unique brand, different from any of the other farmers in the area.  It came in very handy when a storm would take out a fence and two different herds would be intermixed together.  The Holy Spirit clearly identifies us as belonging to God.  We wear His “brand” now.

Thirdly, the seal protects from tampering.  Napoleon could write his letter, fold it and seal it with his wax seal, confident that his seal was so intricate and unique, that it would not be counterfeited.  No one could unseal the letter, read it, or even worse, change any part of it, and then simply reseal it.  It made his correspondence tamper proof.  We are sealed for such a reason as well.  The Holy Spirit seals us from many problems in our lives.  Satan is not allowed to tamper with us because we belong to God.  We might be amazed at the trials and tribulations we are spared simply because we are children of God.

The confidence that we have available to us in regard to our past, present, and our future is augmented greatly by the presence of the Holy Spirit in our lives.  We have the opportunity to live stress free lives if we will believe and trust in what we have been given.  The Holy Spirit is indeed a Comforter.