No Crocodiles at
​Christmas

​No Crocodiles At Christmas
(Christmas)

The story of the Nativity is without a doubt the best known story in the Bible.  The Creator of the universe, the One who holds it all together in the palms of His hand, loved us so much that He lowered Himself to our condition and came to this earth in the most humble circumstances you can possibly imagine.  It is truly an amazing story.

An Original Poem:  “No Crocodiles At Christmas”
A Crocodile Puppet Named Kyle 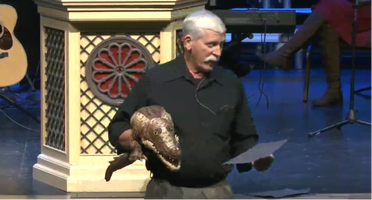 ​(I realize the cadence of the poem lacks a bit, but most of that issue can be corrected by the way it is read.)

No Crocodiles at Christmas

Caesar said, “The world should be taxed.”
“You must register when taxes are filed.”
So Mary and Joseph went as they were told
Even though Mary was great with child.
From Nazareth they walked for many days,
The little family so meek and mild.
But one thing they never saw along the way
Was a crocodile out in the wild.

To Bethlehem they came, tired and worn.
It was late, with a chill in the air.
They were looking for a place to stay the night.
There just was nothing anywhere.
Except an old stable, out in the back,
Far from the main thoroughfare.
It was dirty and smelly with donkeys and sheep,
But at least there were no crocodiles there.

For that very night had been prophesied of
To the Jews first, and then the Gentiles.
Jesus was born and laid in a manger,
Wrapped in swaddling clothes—old style.
Only the animals witnessed this wonder.
In silence they stood for quite awhile.
And if there had been one hiding in back,
You would have seen a crocodile smile.

We talk of the shepherds keeping their sheep
In their fields all through the night.
And as they watched over their flocks
They received an absolute terrible fright.
There were angels that sang of a child that was born
To a world that needed the Light.
And as we look on, do you see what is missing?
There’s not a crocodile in sight.

The shepherds all rose and made haste to see Him.
They thought the effort worthwhile.
For the Babe in the manger had come for a cause.
The world to God He would reconcile.
The shepherds all knew that this baby was unique
And in the manger He looked so fragile.
There were sheep and donkeys and camels and such
But again, there was not even one crocodile.

They stayed for some time and worshipped Him there
They carried no gifts or a wreath.
The great I AM was snuggled under those covers
Somewhere far underneath.
Manger scenes today have a star far up above
With shepherds gathered beneath.
And in the background, one thing you will never see,
Is a mouth filled with crocodile teeth.

The wise men came with gold, frankincense , and myrrh.
They had travelled so many mile.
They went to see the king to help find the Babe,
But found Herod to be nasty and vile.
When they got back to their search, the star reappeared,
And they excitedly set off with a smile.
Their group was large, all the camels and men,
But you guessed it, not one crocodile.

They arrived at the house where the young child was.
They entered in reverence and prayer.
Their long search was ended, they had finally arrived.
They saw Him, He was actually there.
They brought forth their treasures they had carried so far
And presented them with little fanfare.
They worshipped Him in awe, they knew who He was
And of course, there was no crocodile there.

I’ve searched through the Bible, chapter and verse.
For some hint of something for Kyle.
But each time I read, it only gets worse.
There definitely was no crocodile.
But Kyle goes his way, happy and smug
You can see by his look and his smile.
The next time you read the story, you’ll also see
It’s missing at least one crocodile.