If anyone teaches otherwise and does not agree to the sound instruction of our Lord Jesus Christ and to godly teaching, 4 they are conceited and understand nothing. They have an unhealthy interest in controversies and quarrels about words that result in envy, strife, malicious talk, evil suspicions   I Timothy 6:3-4

To live at peace in this world, requires the ability to forgive others.  That is very difficult, if not impossible, to do without God being involved.  We may think we are forgiving, but are we able to forget as well, and never remember the thing again? 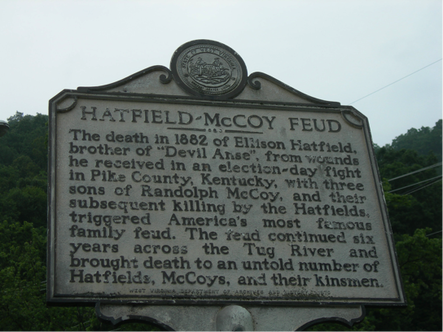 Typically, I split the classroom in half.  I place half of the chairs on one side of the room, and the other half on the other side.  They are set up facing each other, usually about 10 feet apart.  Using the blue paper, I cut a somewhat meandering “creek” between the two families.  Students are allowed to sit anywhere they like.  The two sides of the “river” are clearly marked as Hatfield or McCoy.

This lesson requires some effort on the presenter’s part.  I start by grabbing an empty chair, setting it up to the side of the Hatfields group, facing them, and then sit down and talk to the group.  Just basic chit chat.  For example, “Hi, how’re you?  I’m fine.  I like you people.  You’re good people.  Kinda peaceful over here on this side of the river.  Well, I just wanted to stop in and say hi.  I’m gonna go across the river now and see that other group over there.  Bye”.  I then go and talk to the McCoys in the very same manner.  But during this whole ordeal, I act totally like the other group isn’t listening in on our conversation.  For the next 15 minutes, I constantly go back and forth between the two groups, talking, but very, very gradually introducing issues of contention.  For example, on one visit I might add that I “heard” something bad about the other group, and I’m going to go check it out.  Of course I tell the other group the same thing.  Then it becomes “I’m pretty sure its all true”, then “It is true”, then “How can you trust people like that?”, then “They are bad people, you can tell by their eyes.”, then “Never trust a Hatfiled (or McCoy)”, then “They are truly despicable people, horrible people.  You’ve heard all the rumors, well, they’re true!”

I begin each new conversation with each group with the same phrase, “Hi.  How’re you?”  The repetition gets really old and funny as you go along.  The key to this is to gradually escalate your bad opinion about the other group, taking little steps here and there to increase your repugnance towards the other group. And of course, treat both sides the same.  When you have sufficiently berated the other group to the point of total disdain, sneakily pass out to the back row a roll of toilet paper to each person, agreeing that on command, they are to throw it toward that offensive group across the river.  Do the same with the other group.  Now both groups are probably into the idea that they are the superior group and the other are despicable, and you have successfully armed both groups for a confrontation.  On command, they start throwing TP around.  It can get pretty chaotic in a very big hurry.  When the war has gone on long enough, call a truce and tell the real story of the Hatfields and the McCoys and their stupid feud that raged for many years.

The Hatfield and McCoy Feud


As Christians, we may be tempted to seek revenge at times.  When someone wrongs us, our natural instinct is to get even.  But Jesus taught to turn the other cheek, and go the extra mile.  Love does not hurt others—ever.  So what are we to do?  One of the names of Jesus, a title really, is the term Redeemer.  That word carries within itself an Old Testament thought that we would do well to remember.

Jesus said in the New Testament that He had come to fulfill the Law, not do away with it. That statement reinforces the idea that much of the Law pointed to, or foreshadowed, the coming Messiah, our Redeemer, Jesus.  To a Hebrew, the New Testament term of redeemer would be more accurately defined as kinsman-redeemer. The Old Testament law of the kinsman-redeemer provides some interesting insights into the concept of calling Jesus our Redeemer.

The kinsman-redeemer was a respected individual family member, specifically appointed by each family to their position of responsibility.  In the event of someone in the family falling into trouble of any kind, it was the duty of the kinsman-redeemer to exact justice.  Remember, there were no acting, law enforcement officials in the entire nation of Israel.  Say, for example, a family member was murdered.  It was the kinsman-redeemer’s responsibility to solve the crime, track down the perpetrator, and exact justice.
​
If we call Jesus our Redeemer, that name takes us directly to this Old Testament law.  It is the basis for what Jesus said about “turning the other cheek”.  It is not our job to retaliate.  We do not have the authority to punish.  It is the kinsman-redeemer’s obligation to take care of that for us.  God has said, “Vengeance is mine.”  We should understand that extends directly toward our circumstances.  God will take care of enforcing His rules.  We need only to sit back and let Him fulfill His duty.