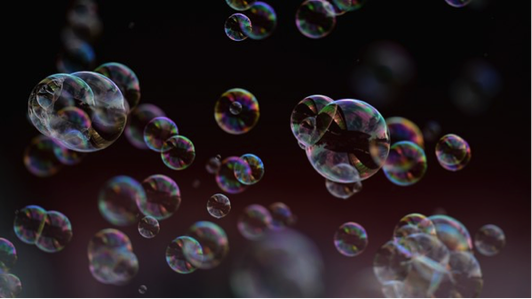 This is probably a very short lesson or an add-on to a larger lesson.  The idea is to blow bubbles with the bubble mixture and attempt to catch one.  Of course they pop when touched.  All of the items needed are available quite inexpensively online at many magic shops.  They include a gimmicked bubble mixture container and the solid bubble.  You simply blow a few bubbles and “catch” one, showing the solid bubble in your hand.  You can do all kinds of things with it.

This is simply an answer to the question, “Can you believe everything you see?”  The response, after seeing the demonstration, must be a resounding “No!”  So what can we believe?  The Bible.  Always, always, always.

Some time back I had the opportunity to observe a murder trial from the very first opening argument through to the jury verdict and sentencing by the judge.  I was fascinated by the courtroom proceedings and listened and watched with interest as evidence was introduced and witnesses testified.  Interestingly, there was no one piece of evidence that, if taken by itself, was worthy of pressing the jury towards a innocent or   guilty verdict.  It was the sum total of all of the witness testimony and all of the evidence that directed the jury’s decision.  Our understanding of the reality of God and the truth of the Bible hangs in the same balance.  We must consider all of the evidence.

Will there at times be days of doubt?  Yes, even some of the heroes of the Bible exhibited skepticism at times.  Usually that uncertainty was a result of their physical senses.  What they saw, and felt, and heard, and smelled overwhelmed the truth that they knew, deep down, was unchanging.  I came across a little demonstration that illustrates well the idea that our minds can be fooled, even when we see clearly what is going on.  Use three identical boxes of playing cards.  Take the cards out of two of the boxes and place the empty boxes on top of each other on a table.  Then place the remaining full box of cards on top of the pile neatly.  Using one hand, pick up the three boxes all together about 6 inches off of the table.  Place them down, and then only pick up the top box with the same hand.  Even though your mind is screaming at you that it simply just cannot be possible, the single box of cards feels heavier than the three boxes together!  Try it.  And keep telling yourself that it is not possible.  Your mind will tell you it is.  So what can we believe?  What can we trust completely?