Woe to you, teachers of the law and Pharisees, you hypocrites! You clean the outside of the cup and dish, but inside they are full of greed and self-indulgence.  Matthew 23:25

The word hypocrite has its root in Greek drama.  Actors often played more than one role in a play and differentiated their characters by wearing various masks.  We can find it too easy at times to play roles in life.  God asks us to be honest in every aspect of our lives.  We need to be honest with ourselves as well.  Pretense will not carry someone very far.  The world sees through the charade much easier than we would often admit.

A Power Point Of The Hippo Hunt
Several Boards Bolted Together 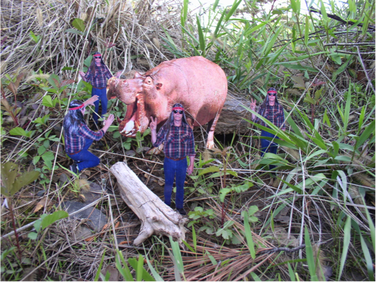 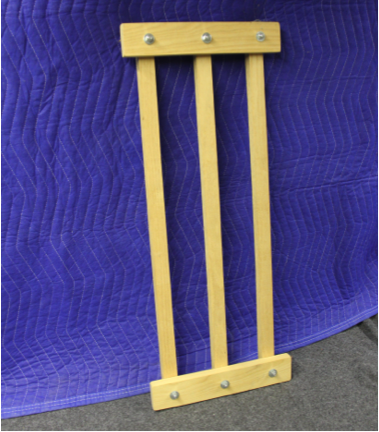 I will be right up front, there is some silliness here.  First, I took a series of photographs of myself in various positions, printed them out on glossy photo paper, cut myself out of the photo and glued a small stick to the back of the cutout.  I also found various animal photos and printed them as well, expanding them to the appropriate proportional size, and, again, gluing a stick to the back.  These characters can be placed outside in various positions and photographed close up to look at least somewhat realistic.  I suppose the same could be done digitally with a good photo editing tool, but I don’t have one, so I do it “old school”.  I then created a story line about four hippies who go to the Australian Outback in search of the rare Australian Land Hippo, a very, very dangerous creature in the wild.  It is a Power Point slide show narrated to the class in a thick, “as good as I can do” Aussie accent, much in the vein of the late Steve Irwin, The Crocodile Hunter.

(Entirely In An Australian Accent)

G’Day Mates!  Welcome to the land down under.  I’m your host, Crocodile Lyle, and I’m here to share with you an exciting adventure I had this summer.  I had the opportunity to travel to Australia with the finest team of scientists, the Four Happy Hippy Hippo Hunters.  This is a map of Australia, and our expedition was headed up into the Northern Territory.  Less quicksand, more snakes, but a good choice none the less.

As you can see, our flight was less than most would imagine as far as amenities go, but it worked well for the Hippy Hippo Hunters.  They are used to the wilds.  I wasn’t sure where the outback actually started.  I was sure glad they had a sign.  As you can see the terrain is rough and rugged, filled with large trees, huge boulders, and steep hillsides.  This is perfect habitat for our cautious prey—the rare Australian Land Hippo.

These creatures may not look the part, but they are extremely agile, able to run along a cliff edge with the nimbleness of a mountain goat.  This one was discovered meandering through the cliffs and boulders, searching for a meal.  They are the top of the food chain here in the outback, and are fearless when it comes to the hunt.  Hippos have been known to eat anything they can catch, and the Land Hippo is the most cunning of all animals in the Australian Outback.

Luckily, our Four Hippies had researched their hunting techniques and were always on guard for that one that just might try to eat them.  Note how easily it climbs and hugs the rock face, as if glued right to it.

This was a scientific expedition, and so much care was taken to document as much of this wildlife as possible.  Australian Land Hippos are measured by their “bite radius”.  Harry is the best at this technique, and you will notice how well he is measuring, even at the risk of his own life.  On the very first day, we stumbled upon several fine specimens, including this light pink male, who defended his territory with a display called “Yawning”.  It is his way of warning us to stay clear, but Harry, always one to do the scientific when possible, quickly jumped in and did a bite radius measurement of this animal as well.

We saw a second later that day, and of course, the scientist did his thing.  The next slide is a chilling one.  While the four Hippies were planning their next move, we saw first hand how dangerous these wiley creatures really are.  This 2000 pound female is sneaking through the dense underbrush in search of her next 4 course meal.

Australian land hippos sleep often during the day in caves or crevices in rocks to escape the extreme heat of the Australian Outback.

We were very fortunate to get to see this amazing display as two of the most dangerous animals in the world come face to face with each other.  And never try this at home.  Harry took the opportunity to measure both bite radiuses.  But remember, he is a trained professional.

The next slide shows the four at the base of a giant acacia tree.  If you look closely, you will see a giant salt water crocodile stealthily looking for a meal.  Fortunately, the four hippies were alerted to the issue and scampered to safety.

We did find one magnificent specimen to bring back for further study.  Once tranquilized, measurements are taken and then the animal is packaged for shipment to the United States for study and display in one of the fine zoos here in America.

The last photo is the four Hippies at the end of an arduous week in the Australian Outback.

As you saw in the documentary, this hippo was shipped to the US in a specially built crate.  We use solid oak for the crating, with large bolts for strength.  This is an example of how a hippo crate is constructed.  They must be incredibly strong to contain an enraged hippo.

Now you may be wondering why I went to all the trouble to explain hippo hunting and shipping to you.  Well, that is a fair question.  The answer lies in the fact that Jesus refers to people as being “hippo crates” in Matthew 23:25.  And I wanted you to be familiar with His terminology, so you could understand better.

You’re not buying this at all, are you?!  So I read the Bible verse wrong and needed to come up with a last minute excuse for a lesson?  You don’t buy that either, huh?  Ok, so I went through this twisted, contorted story so that you might remember what Jesus said.  Don’t be a hypocrite.  Don’t put on a fake face and pretend to be something that you are not.  Be honest in the world that you live in.

In theater in the Greek and Roman world, roles were usually played by men, and during any one play, a man might play several different characters.  Their solution to identifying which of the multiple characters might be on stage at any one moment was quite simple.  The actor carried or wore a mask that hid his real face but displayed the character’s face, usually with expression fitting for the scene.  Our word hypocrite comes to us directly from the Greek theater--hypokrites—which simply meant “an interpreter from underneath”—a stage actor behind his mask.

In our English, the word hypocrite refers to someone who is disingenuous about who or what they are in reality.  They are a pretender or a deceiver, usually in a negative connotation.  Jesus warns us to be transparent in our dealings with other people and to be honest to a fault.  When we pretend to be something that we are not, we only fool ourselves.  As Jesus pointed to the Pharisees as an example, note that everyone else there saw through their façade.  They were fooling no one.

As sinful as our world has become, an honest person tends to be quite rare, but quietly admired and respected.  We represent God to the world.  Let’s not just play the role of a Christian as an actor.  We need to live it out in front of everyone who is watching.