And my God will meet all your needs according to the riches of his glory in Christ Jesus.  Philippians 4:19

God asks us to follow Him.  That requires trust on our part.  We cannot see the future as He does but must accept the fact that He has a plan for our lives and is always going to lead us in a direction that is the very best for us ultimately.  Obedience, on our part, must also be a part of the process.  Trust is a heart felt belief that God is going to lead us where we need to go.  Obedience is putting that trust into action.  As Christians, we must have both in play to follow God perfectly. 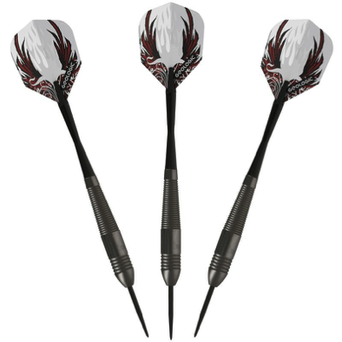 This can be a fun, entertaining demonstration/object lesson.  I start by telling the story of William Tell.  And then we re-enact the story, at least the part about shooting the apple off his son’s head.  I start with a volunteer and blow up a balloon and attach it to the Styrofoam board.  I ask the volunteer to throw from a specified distance to break the balloon with a dart.  After a few throws, I add a magic marker drawing of a person on the paper, blow up another balloon if necessary and pin it on top of the head of the character I drew.  The volunteer will then be given a few more tries.  Usually their throws will land in horrible places on the drawing.  Rarely do they actually hit and break the balloon, but if they do, I blow up another.  After they are feeling comfortable, we change the game.  I search through the audience for someone named Will, or William, or Bill.  Often, there is one, but if not, anyone will do, and I ask them to stand where I have drawn the person on the paper.  I place a balloon above their head, and state that we will continue throwing darts.  The original volunteer at this point will usually have nothing to do with the game now.  The darts are too real.  That is when I produce the plastic shield.  It is just the right size to fit directly above the head of the person being thrown at, with the clear plastic shield protecting them completely from any errantly thrown darts.  The volunteer then throws until they hit the red balloon and it breaks.

As we set up for this demonstration, I would like to take this time to give you a bit of background into what we will be talking about today.

Allow me to take you back to the 14th century.  November 18, 1307, to be exact.  Throughout history we find stories of people who exhibit bravery, honor, and leadership.  And we admire those individuals for their defining character.  Today we will look closely at one of the most remarkable events that shaped history and the world we live in today.

Medieval times were harsh in every way.  The men had to be tough, and the women tougher!  Everyday life was difficult at best.  Historians have correctly described this era as one of the most difficult times to be alive.  If you were one of the lucky ones, you survived.

Daily life required constant attention to things that we take for granted.  Food was not purchased in a grocery store.  It had to be raised and tended.  With no guarantee of success, it was a struggle against weather, insects, and disease.  Even the best gardeners and farmers worked long, strenuous hours in an attempt to stave off failure and famine.

Individuals alive at this time faced uncertainty in many areas of life.  Beyond the concern for food each day, disease was rampant and could be deadly.  The medical profession consisted of Barbers who would, for a fee, cut your arms and “bleed” your disease or illness out of your body.  From our vantage point, we find it offensive to think back upon the prevalent unsanitary conditions experienced by most people.  If you recall, the Black Plague killed a third of Europe during these dark times.

And if that wasn’t enough to worry about, the continent churned in constant political turmoil.  Feudal monarchies were everywhere.  It seems that the search for power, prestige, and privilege is not unique to our day.  Government leaders were generally not to be trusted. Tyrannical rulers were commonplace.  Nobility kept the lower class citizen form achieving true advancement in life.  Life was burdensome in every respect.

It was during the early years of the 14th century that a German monarchy, known as the Habsburg Dynasty, made its grand entrance onto the world stage.  Their tentacles of power and influence stretched far and wide across Europe.  From Spain to present day Russia their domination was notable.  With their tenure well entrenched in Austria, they set their sights upon an important Alpine pass attended by a small hamlet known as Altdorf.

Altdorf was strategically located near the center of an area known at time time as Uri.  Its close proximity to a critical path through the formidable natural impediment, known as the Alps, made it an imperative conquest for the Habsburg monarchy.  Militarily, they had little resistance as they took claim to the scenic countryside.  To ensure their continued control and supremacy, they charged one of the most despicable, ruthless, and cruel leaders to bring the people of Uri into submission.

He was known by his given name of Gessler.  As dictator, he ruled at will. No one dared to confront him or his heavy-handedness.  The inhabitants of the area lived in fear.  And Gessler basked in it.

During Medieval times, it was common for villages and towns to have a tree planted near the center of what we might consider “downtown.”  Often, it was a linden tree.  These trees have a tremendous lifespan and grow to enormous size.  The tree had a specific purpose.  As it was in the center of town, it was the accepted place where news might be posted, trials were conducted, punishment handed out, or public meetings held.  Gessler used this linden tree to his advantage.  In an attempt to intimidate the residents of Altdorf, he placed a pole under the linden, hung his hat high upon the tip of the pole and commanded that everyone who passed by must bow in reverence and respect in recognition of his authority.

There lived an extraordinary, mountain of a man, in that area by the name of William Tell.  He had nothing but disdain for Gessler and everything that he stood for.  So as he and his son strode into town that day, William Tell gave the hat on the pole a glance but went on about his business, ignoring the command of Gessler.  Gessler had been watching this display of repudiation, and was incensed by Tell’s behavior.  He had him arrested immediately and tried and convicted him right there on the spot.  Upon learning that William Tell was known as a marksman with a crossbow, he came up with an insidious idea.  Mr. Tell must shoot an apple off the head of his son with his crossbow.   He did so successfully, and history changed that day, as Gessler and all who followed him were forced from their positions and banished or killed.

If I may take a moment now, I would like to re-enact this pivotal moment in history.

(At this point, run through the object lesson as described above.)

You may be wondering to yourself why we played this little game of darts and balloons, and William Tell.  The point is very simple.  As we go though life, God may ask us to step into something that looks like it might be a horrible place to follow God into.  However, you can know that if God has asked us to follow him there, He will provide everything we need.

Before this lesson began, I knew that our volunteer would have a problem and be in need of help.  So I put a plan into place to ensure that the help would be there when needed.  I paid the price to buy the necessary materials to construct this shield and I came to where she was and provided this for her.  She could refuse the shield and face the darts alone, but she chose not to.  How foolish it would have been for her to refuse my offer.

God loves His children and we can trust Him to provide all that we need.  Before time began, God knew that we would need help.  So He put a plan in place and orchestrated all of history to make it happen.  He paid the price for our salvation and offers it free of charge to each of us.  And He came to this earth, to where we are to make the offer official and personal.  All we need to do is accept the free gift.