King Nebuchadnezzar made an image of gold, sixty cubits high and six cubits wide and set it up on the plain of Dura in the province of Babylon.  Daniel 3:1

As human beings, we struggle to see the affairs of our lives from God’s perspective.  The world we live in is so noisy and busy that it drowns out most everything else.  God describes His leading in our lives as a “still, small voice”.  We must be listening.  Our view of the world and of ourselves is a skewed one.  The Bible must be the reference point for all our decisions in life.

A Scaled Drawing Of The Statue Of Daniel 3 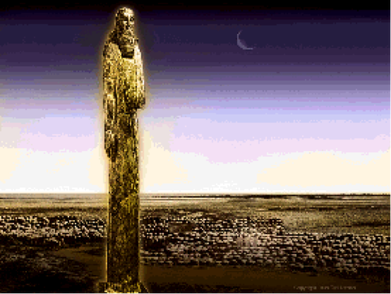 We are generally quite familiar with the story of the three Hebrew children who were thrown into the fiery furnace and how God miraculously saved them.  There are aspects to this story that might be overlooked if one simply looks at the fiery furnace part.  Lets take a moment to consider the statue itself.  Nebuchadnezzar was an amazing man whom God used greatly.  However, He did make a few mistakes along the way.  Building that golden statue and requiring everyone to worship it was a big one.

He had an issue with pride.  That is a commodity that God will not tolerate for long.  This statue was an outgrowth of his lack of humility, and caused much heartache for his people.  The three Hebrew children bore the brunt of his wrath when they refused to worship the idol on the plains.  This monolith was very, very tall and could have been seen from a great distance.  Coming up to it from any direction, there would have been nothing but flat, open ground.  And gold, bright and shiny in the daylight, would have reflected well and been easily seen for miles around.

Man, too often when searching for greatness, looks to self first.  We see the world from the narrow perspective of just a few years of life and a few thousand people we may have met during our lives.  But the picture is much, much larger than any one of us can imagine.  Our view of ourselves is skewed by our sin.  The statue built by King Nebuchadnezzar is a shining example of this.  (Pun intended.)  Note the dimensions included in the account.  God does not waste space in His Word with filler that serves no purpose.  He wanted us to see the dimensions of the grotesque idol.  At 90 feet high and only 9 feet wide, this was more like a caricature or cartoon sculpture than anything relating to real life.  I stand approximately 18 inches wide at the waist.  If my body had the same proportions as this dazzling piece of gold, I would stand a mere 180 inches tall.  That is 15 feet tall!

We must view life from God’s perspective.  Anything else will be a skewed, grotesque attempt at understanding the world around us.  God is in control.  And He sees things from a much higher perspective than we ever will.  We would do well to trust His vantage point.