To Tell the Truth

​To Tell The Truth
(Lies)
(Honesty)

Therefore each of you must put off falsehood and speak truthfully to your neighbor, for we are all members of one body.  Ephesians 4:25

Christians have no option in this area.  As they used to say in a court of law, we are to tell the truth, the whole truth and nothing but the truth.  Anyone who has been around in the world for very long will admit that people that genuinely live their life by that motto are actually quite rare.  It is always a pleasure to meet someone that you can trust completely.  Even the unsaved are looking for someone in business, or life in general, who will be honest every time. 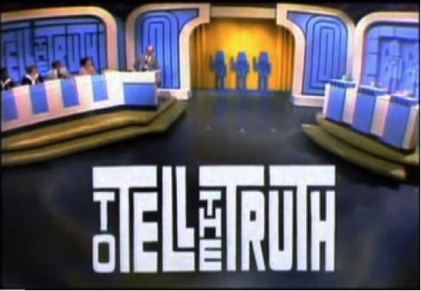 I grew up with the TV game show called “To Tell The Truth”.  The way the show worked, three people were introduced with a strange or interesting story.  Only one of them was the actual central figure of the story, the other two were imposters.  The celebrity panel members were each given a minute or two to ask pertinent questions of the three in an attempt to figure out who was the real person in the story.  The actual person had to always tell the truth.  The imposters could lie through their teeth to try to fool the panel members.

I find a few adults and ask them if any of them have an interesting story that took place in their lives.  If I cannot find anything of interest, I always have my wife’s story to fall back on.  Here is hers as an example.

When I was in college, I worked one summer in Lake Placid, New York, at an upscale vacation resort.

It was not uncommon to have wealthy and, sometimes, even famous people visiting.

I worked as a server in the restaurant there.

One night, I was assigned to a large table.  Sitting at that table was the quarterback for the Miami Dolphins—Bob Griese.  He had led his team to play in Super Bowl VI in 1972, and then on to win Super Bowl VII in 1973, and Super Bowl VIII in 1974.

With dessert, we always served coffee.  As I was refilling Mr. Griese’s cup, he moved his hand.  And to my horror, I poured hot coffee all over his throwing hand.  He assured me that He was fine.

But the Dolphins never made it to the Super Bowl again.

I will generally introduce the three contestants and the story.  I divide the class into 4 teams and each team can ask questions for a specified time limit to try to determine who is telling the truth and who is lying.  And then we vote.  The winning team is usually awarded a prize of candy or something of that nature.

Ephesians 4:25 begins with the word therefore.  I have been taught that whenever that word appears, to look just ahead of the word, to see what the therefore is there for.  We find Paul reminding the church at Ephesus that they, as Christians, were now distinctive and should be noticeably different.  They were in a very dark culture, spiritually speaking, and that culture was prone to all kinds of sin.

Don’t forget that one of the Seven Wonders of the Ancient World was to be found in Ephesus during this time frame.  The temple to the Ephesian goddess, Artemis, was located there.  The people of Ephesus saw this temple, and the religion that flourished because of it, to be their cultural obligation as a city.  They claimed ownership and all rights and responsibility for the purity of the worship of Artemis.  It was an absolutely incredible building, a true architectural wonder.  Antipator of Sidon, who compiled a list of seven wonders described the temple this way:

I have set eyes on the wall of lofty Babylon on which is a road for chariots, and the statue of Zeus by the Alpheus, and the hanging gardens, and the colossus of the Sun, and the huge labor of the high pyramids, and the vast tomb of Mausolus; but when I saw the house of Artemis that mounted to the clouds, those other marvels lost their brilliancy, and I said, "Lo, apart from Olympus, the Sun never looked on aught so grand".

You cannot talk about Ephesus and ignore such a prominent part of its culture.  Due to all of the worshippers who would come to the city to worship and bring offerings, the temple became the world’s largest bank in its time.  Worship rituals involved all types of eroticism; both male and female prostitutes were readily available.  It is in this spiritually dark setting that the church in Ephesus found themselves living and working and going about their daily activities.  No doubt they rubbed shoulders with many of the local people as well as travellers who would come for the religious festivities.

Their absolute honesty would have stood out like a beacon of light.  I am confident that people of that era were no different that we are today.  Research has shown that 90% of us admit that we lie in some fashion or to some degree.  Further study has shown little difference between the unsaved world and those who call themselves Christians.  We have work to do in the arena of honesty.  Paul addresses the church as if they are guilty of falsehoods, and it is no wonder, we would probably be addressed the same way were Paul writing this epistle to us.

It takes effort to lie well.  A good liar must remember everything they say so that they will not tripped up later by someone.  The honest man need only remember the truth. Elsewhere in Scripture God warns that the sin of lying comes back around eventually—a liar will be caught.  Maybe not in this life fully, but we will all stand before Almighty God and answer for everything we have done in this life, including every lie, half truth, omitted truth, or untold truth.