There are many skeptics of the validity of Scripture.  Even in the church there is doubt concerning the absolute reliability of God’s Word.  The Bible is by far the most amazing book on the face of the earth!  It does not just contain the Words of God, it is the living, breathing Word of God, sharper than any two edged sword, and it will not go out from Him and return empty.  This lesson is designed to give a visual picture of one of the most fascinating aspects of the Bible and its acceptance through history. 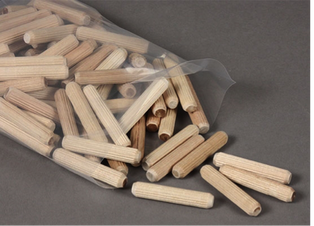 The focus of this lesson is on removing doubt regarding the validity of the Bible, and indirectly regarding the existence of God.  It does not argue Bible technicalities or “so called” errors.  Rather, it focuses on some basic mathematical facts that point to an inescapable conclusion.  God had His hand in ensuring His Word is set apart from all other literature or historical documents.

I begin with some pre-prepared bowls containing dowel pins.  I bring them out and set them on a table in front of me as I introduce each with a short explanation.
As I introduce each bowl, I ask a rhetorical question as to whether or not anyone doubts the factual existence of Plato or Aristotle or Homer.  Of course history accepts them as real historical figures.  Now let’s compare the legacy of the Bible.  I then bring out my 75 pound bag containing 24,000 dowel pins and begin to pour it out on the table, covering all of the other bowls, and spilling to the floor around me.  It’s a great visual, contrasting Gods Book to the greatest books of history.  We have over 24,000 original manuscripts of the Bible, all of them dating back to a mere 30-100 years after Jesus’ death and resurrection.  As Josh McDowell put it years ago, “it is evidence that demands a verdict.”  How can we still doubt?

I had occasion once to observe a murder trial.  I spent nearly two weeks watching everything from the opening statements of the prosecution and defense all the way through to the closing arguments and the eventual jury decision and judge’s sentencing.  It was fascinating to watch, as each piece of evidence was painstakingly entered and corroborated by experts or eyewitnesses.  There were interviews and rebuttals surrounding the nearly 300 total pieces of evidence entered during the trial.  There was not one single piece of evidence entered that was the sole deciding factor in the case.  I talked to one of the jurors later, and he voluntarily told me that they had deliberated for many hours over every piece of evidence and that there was not just one that decided the case for them.  It was the preponderance of evidence that was striking.  Everything pointed to the defendant’s guilt and they returned with a unanimous guilty verdict.

At center stage is the Bible.  If the world can sufficiently discredit it, everything that Satan has strived for would come true.  Our understanding of God, salvation, eternity, good and bad, right and wrong—they all hinge on the written Word of God.  God has taken great care to make the Bible unique.  It is dramatically different from all other books, both in content and how it came to be.  The sheer numbers alone are striking.  God has made it very clear that the Bible is unique and different than any other piece of literature ever printed in history.  There is a preponderance of evidence.

From our vantage point in history, the aggression towards Scripture is very noticeable.  The Bible is under assault every day.  Even in the church there are those who pick and choose the parts that they feel are believable and they leave difficult topics under the heading of “Mythology”.  When it is considered acceptable to embrace one passage and throw out another, we tread into very dangerous territory.  Satan knows that if he can discredit the Word, he can cast doubt on anything contained in Scripture.  And if he can cast doubt, he can reinterpret it to suit his devious plan.  That reinterpreted language always embraces sin and wrong, and therein we see his specialty—taking that which is good and pure and adding just enough wrong to make it seem palatable, but in reality, sinful.

It is a choice to believe and totally trust the Word of God as perfect and without compromising flaw.  It has held up to intense scrutiny for many years, and will, without a doubt, continue to do so for all of eternity.