When we take on the name of Christ, we also inherit the responsibility to act like Christ.  One of the character traits that we must learn to imitate is His tremendous generosity.  An honest look through the history of our lives, reveals a God who is loving and kind, to be sure.  But when we examine the things in our lives closely, we discover that He has given us much more than we deserve.  Scripture says that we deserve death because of our sin, and yet, He has granted us a pardon and lavished His love upon us.  What a gift that is! 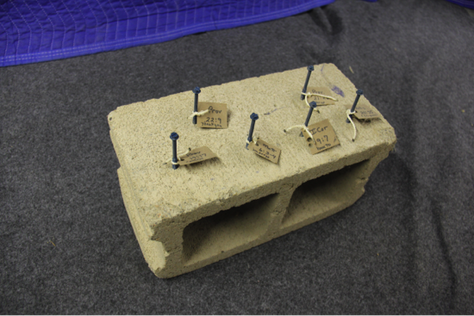 When possible, I arrange the chairs in the room in a semi circle around the cement block.  It becomes the center of attention, and has string line attached to each of the concrete anchors sticking out of it.  Attached to each string is a candy bar, tied tightly so that it cannot be removed.  I “give” the candy bars out to random individuals and invite them to take them home with them afterwards.  Of course they cannot because of the strings attached.  I follow up with the lesson, and as each point is discussed, I cut the string to one of the candy bars, finally, truly giving it to the recipient.

We like to think that we are generous people.  Unfortunately, that is not always the case.  We give with ulterior motives, or begrudgingly, or maybe not quite as generously as we can and should.  First of all, let’s establish this one thought.  The requirement to give, commanded to the Christian, extends far beyond just money.  God has actually little need of your finances.  He owns everything, why would he need a paltry few dollars from us?  God wants us to be generous with our time and our talents as well.  It is us that He desires to have access to.

Jesus talked about the heart and its view towards money often as He walked this earth.  But He never pointed at money as being the problem.  He assured those listening that what He was more concerned about was the heart felt attitude towards the physical things that we have been given by God.  Anything in our lives that we hold closer to our chest than Him, is a sin that needs to be dealt with.  We are called to be generous, and sometimes in our deviousness and self-deception, we give gifts with strings attached.  Let’s look at some of the more popular strings that keep our gifts from being true gifts.

We are to cheerfully give of ourselves and our time and our money.  Let’s make sure we don’t have any strings attached to those gifts.