So, What Color
Was the Donkey?

​So, What Color Was The Donkey?
(Palm Sunday)

Jesus rode into Jerusalem one day on a donkey.  We commonly refer to it as Palm Sunday.  That day was not just any day.  It was more fitting than anyone there could have realized at the time.  It was the perfect day for Jesus, the Lamb of God, to ride into the city.

A Drawing (Which Will Be Explained In The Lesson) 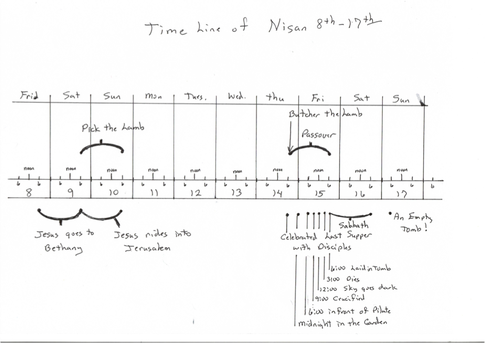 I find the pictures and types of Jesus in the Old Testament fascinating.  To miss them and their tie to the New Testament is to overlook an important aspect of the Bible.  It all fits together so amazingly well, a book written over thousands of years of time, and yet it pieces together so precisely, it’s as if it was planned that way.  Or course I say that facetiously.  Palm Sunday was planned before time began.  It had to happen the way it did.  And it is amazing to see it unfold from this perspective.

In the Old Testament Law, given by God to Moses, the people of Israel were to observe their religious festivals with great care and detail.  Understand that they did not operate by the same calendar we have grown accustomed to.  Our Gregorian calendar was introduced by Pope Gregory XIII in 1582.  The ancient Israelites had their own, instituted by God Himself, when they left Egypt.  Our calendar days extend from midnight to midnight.  Israelite days were calculated from sundown to sundown.  In Exodus 12, we find God commanding Moses to have the people search out and set aside a special lamb for Passover.  It was to specifically be found on the tenth of Nisan.  It was to be held in observation until the evening of the 14th, when it was to be slaughtered and eaten as a Passover meal.  This was to be a command for all generations to follow.  This drawing illustrates a 9 day time period of the month of Nisan 8th through the 17th.

​Note that the lamb was chosen on the 10th of the month, sometime between sundown on what we would see as the 9th and sundown on the 10th, and held until the evening of the 14th, when it was slaughtered and eaten.  The following day was Passover Day, sundown to sundown.  This feast and celebration was observed for thousands of years unchanged.  Even Jesus, being a good Jew, celebrated this time as well.

That takes us to John 12.  John’s Gospel is unique.  He takes effort to give us physical locations and calendar time settings in far more detail than the other Gospels.  His details are important for us in this discussion.  John states that 6 days before the Passover, Jesus and his disciples traveled to the home of their friends in Bethany.  Counting backwards, we come to the conclusion that they must have traveled sometime between sundown on what we would call the 8th and sundown on the 9th.  Knowing that there were thieves and such out in open areas, travel at night was rare.  They probably walked in the morning and were easily in Bethany by the evening meal.  John describes the meal and the events that took place there.  Then he takes us to the following day and states that the next day Jesus rode into Jerusalem on a donkey with praise and adoration coming from a great crowd that had gathered.  Look carefully at the timeline and note what all of Israel was to do that very day.  They were to pick a lamb for Passover.  This cheering crowd was picking The Lamb for the ultimate Passover.  Jesus is our Passover Lamb.  This event, taking place on this particular day, was not a coincidence. 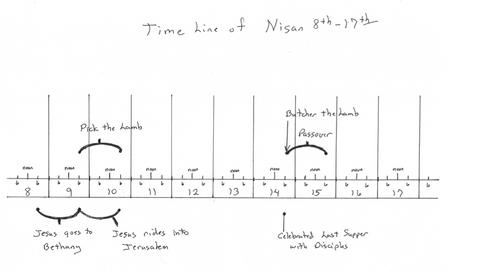 ​The Gospels tell us how Jesus celebrated the Last Supper with his closest companions.  This was a Passover celebration that would end in what initially looked like tragedy, but in reality, must happen the way it did.  Jesus was sacrificed on the Passover Day and laid in a tomb that evening before sundown, where His body was until that first day of the week. 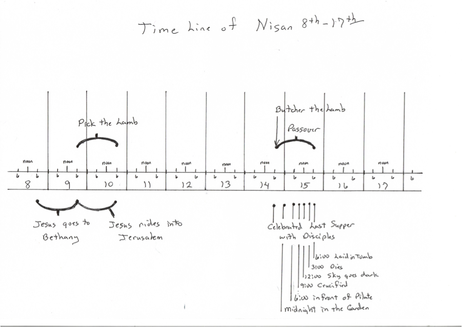 ​Early that Sunday morning, they found the tomb empty and Jesus risen from the dead. 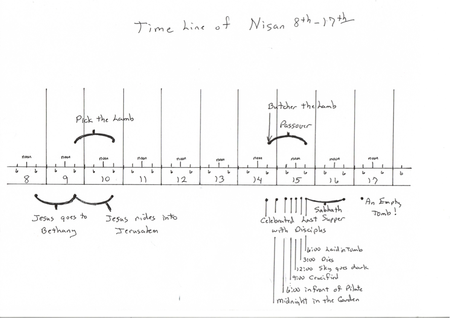 That little bit on information allows us to label the days Sunday through Saturday on the correct slot in the timeline.  The final result is that Jesus did indeed ride into Jerusalem on a Palm Sunday morning.  He was the Lamb of God, chosen by the people and observed by them until His death on Passover day 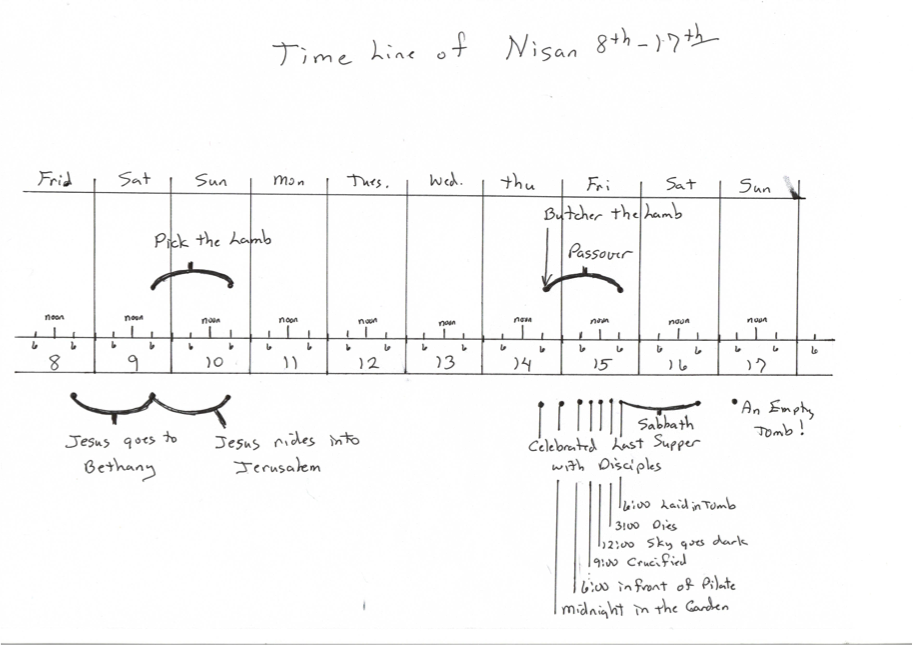 ​None of all of this is a coincidence.  God planned it, made sure things happened exactly according to plan, and told us to look at the details.  His hand was definitely in the details.

As for the color of the donkey, we don’t know for sure.  It is my guess that it was in keeping with royal tradition of the day.  The kings of Israel would not ride in on a white horse, but on a white donkey.  I find myself looking at the classic paintings depicting that Palm Sunday morning.  It is interesting how many of them are painted with a white donkey carrying our Lord.
PDF of Lesson
PDF of Timeline