11 I saw heaven standing open and there before me was a white horse, whose rider is called Faithful and True. With justice he judges and wages war. 12 His eyes are like blazing fire, and on his head are many crowns. He has a name written on him that no one knows but he himself. 13 He is dressed in a robe dipped in blood, and his name is the Word of God. 14 The armies of heaven were following him, riding on white horses and dressed in fine linen, white and clean. 15 Coming out of his mouth is a sharp sword with which to strike down the nations. ‘He will rule them with an iron scepter.’ He treads the winepress of the fury of the wrath of God Almighty. 16 On his robe and on his thigh he has this name written: King of Kings and Lord of Lords.  Revelation 19:11-16

Scripture contains passages which are difficult to understand. The first chapter of Ezekiel is arguably at the top of the list of the odd and strange. God is omniscient, omnipresent, omnipotent and beyond the scope of our limited intellect. He has chosen to reveal Himself to us in small increments, glimpses of the awesome majesty that is His essence. We find in the pages of the Bible everything we need to know about Him. An infinite God revealed to us in a finite number of pages means one thing—every one of those pages are important.

Diamonds are the most prized of gems. In the rough, uncut and unpolished, they are relatively unimpressive. Their ultimate beauty is realized when a truly gifted diamond cutter creates facets on the surfaces of the crystal, allowing the light to reflect and sparkle. An analogy can be drawn to our understanding of God. As we recognize and define an attribute of God, we cut an additional facet on the face of the “diamond” of our understanding of Jehovah. As those facets increase in number, the beauty of our Heavenly Father shines forth. Ezekiel 1, Revelation 4, and Revelation 19, together, define four facets on the face of that diamond.

Ezekiel struggles to find words to adequately describe the scene before him in the first chapter of his prophecy. One cannot read through the entire narrative without asking “What in the world are we seeing?” Hollywood would struggle to recreate what is described here, but we will focus on one particular aspect of what Scripture has for us to discover. Four creatures are introduced in the passage, completely beyond our comprehension, with four faces each. That particular attribute is more than just a bizarre oddity, it has significance. The Bible is not a mere piece of literature. It is an amazingly intricately interwoven collection of writings obviously inspired by God and put together by Him for our use to understand Him.

The Object
None:  This is a lecture lesson.  But I have included the best artist rendering that I have found to date.  (Please do not reproduce this photo without expressed permission of the artist.) 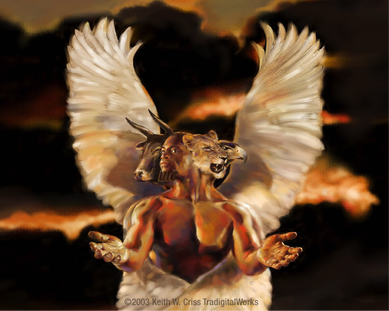 Revelation 19 describes for us in detail, a rider on a white horse. That rider, found in verses eleven through sixteen, is Jesus Christ. When He returns in the fullness of His glory, He is described by four specific names.
The greatest mystery of Scripture is this simple fact: Why would God, the Creator, the Almighty, lower Himself to the condition of his creation, man, and walk among us? His love for us is astounding, a great unknown quality to us were it not for the fact that He demonstrated His love toward us by going to a cross and dying a very human death on our behalf. Luke recounts in detail the human being he touched and talked to face to face, who he also recognized to be God.

Four unique Gospels, four unique faces, four key attributes of God, masterfully intertwined in the Bible. The Word of God is unlike any other piece of literature, and the deeper one looks into Scripture, the more there is to be learned. Never discontinue that thrilling discovery.