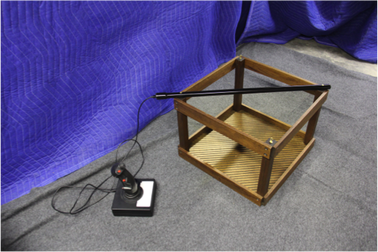 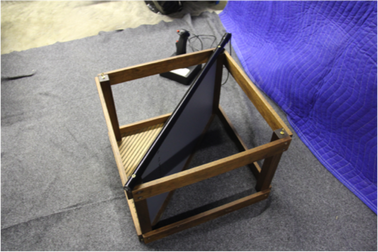 ​I call this an Anti-Gravity Machine.  You can call it anything you like.  It can be used a variety of different ways.  It is a simple magic illusion.  I built this as a seemingly open wood crate.  You will notice a black pipe running diagonally across the top of the crate.  That is a key component of this illusion.  Directly under that pipe, cut into the slots of the wood floor, stands a vertical mirror.  From the front it looks remarkably like a square box, but in reality what you see is simply a reflection of the front half of the box in the mirror.  This leaves all the area behind the mirror to use for various illusions.  For example, I bought a dozen very small black and white teddy bears at the dollar store.  I can make them disappear by dropping them just behind the black crossbar.  I give them some nonsensical story of this being a portal into another dimension.  With a little care, you can hop into the crate with one foot in front of the mirror and one behind.  By shifting your weight carefully and remaining balanced, you can lift the visible foot off the floor an inch or so and with the reflection it looks as if you have levitated in the box.  Thus, the name of the illusion-The Anti-Gravity Machine.

First, an introduction.     Some things even science fiction struggles to rationalize.  Allow me explain as best I can.  The story is told of an ancient forest in a dark, uncharted region of Africa with trees unknown to science or the modern world.  Legends tell us of peculiar things—strange things—that happen in the presence of the few remaining samples of this wood that have survived the millennia, carefully handed down from one generation to another.  It is said that a manuscript of extreme antiquity reveals that even the simplest box, built of this wood, defies all known laws of physics, and is proof itself of the existence of other dimensions.  After much careful study and research, and a bit of luck, I must have obtained some of this very lumber!  A simple box with a very odd characteristic—the stuff legends are made of!

Some time back I had the opportunity to observe a murder trial from the very first opening argument through to the jury verdict and sentencing by the judge.  I was fascinated by the courtroom proceedings and listened and watched with interest as evidence was introduced and witnesses testified.  Interestingly, there was no one piece of evidence that, if taken by itself, was worthy of pressing the jury towards a innocent or   guilty verdict.  It was the sum total of all of the witness testimony and all of the evidence that directed the jury’s decision.  Our understanding of the reality of God and the truth of the Bible hangs in the same balance.  We must consider all of the evidence.