And no wonder, for Satan himself masquerades as an angel of light.  II Corinthians 11:14

Satan is a master at His craft.  He is wicked and is very knowledgeable of his ultimate end burning in torment forever.  His simple plan is to take as many of us with him as possible.  To do that he has devised schemes quite expertly and we would do well to be watching carefully.  Arsenic in an arsenic bottle is clearly defined and recognized as dangerous.  But a bit of arsenic in a bottle of otherwise good Coke, is deadly, unmarked, and a gigantic problem.  That type of work is where Satan excels, taking what is otherwise good, and mixing in just enough sin to make it a deadly combination but still very, very enticing. 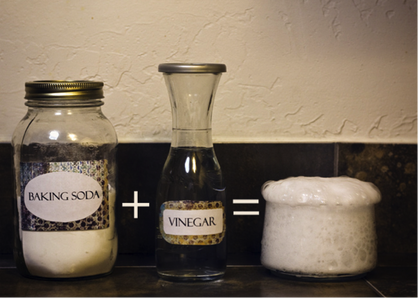 This lesson is presented in a baking show or science experiment type of format.  I present myself and put on the coveralls, goggles and gloves and explain that I am going to demonstrate how to make my favorite dessert dish—mush.  And should something go terribly wrong and I end up on the floor face down in my accident, I have the phone number to call printed neatly on my back—911.  Mush is actually quite easy to make, and I ask for a volunteer to come up and learn directly from the master chef.  We each have a pie plate and small packages of the ingredients in front of us.  The key to successful mush is to mix the ingredients together very quickly and stir.  Their “flour” is actually baking soda, and their “water” is actually vinegar.  We both pour out our flour into the pie plate, mine is real flour, theirs is baking soda, and then get ready to dump the water in very quickly and stir.  My experiment goes just fine, but theirs is a foaming mess of vinegar and baking soda interaction.  We then look carefully at the labels on the ingredients that they used and notice that theirs were packaged by Satan’s Packaging, Inc.  That takes us into the lesson.

Many years ago, my cousin, an aspiring journalist and writer, met a young lady who had been involved in, and subsequently rescued from, a cult known as the Unification Church.  This cult was very well known in the early 70’s and was run by a Korean named Sun Myung Moon.  The “Moonies”, as they were sometimes called, were known to be quite indoctrinating and once a victim fell into their embrace, it was extremely difficult, if not impossible to get out of the organization without outside help.  Often it required a direct intervention and rescue, followed by deprogramming to bring the individual back to normalcy.  My cousin heard her story and the two of them co-wrote a book called “As Angels of Light”.  The Unification Church presented itself as a harmless, loving and caring group of young people bent on knowing God.  In reality, it was a scheme to get people into their little group, involved in what was essentially slave labor, and take all of their material possessions and money.  Satan is a master at his craft of deception.

God created Satan beautiful and perfect.  We would do well to get the Hollywood or cartoon imagery of a little red goat/man with horns and a tail out of our minds.  The angel described in the Bible as Lucifer, was absolutely perfect and the most beautiful of all created beings.  Then pride stepped in and he sinned and in God’s rulebook, there is no redemption plan for angels who fail to keep God’s commands.  He is introduced in Genesis in the Garden of Eden as a serpent.  In Revelation, he has become the great dragon.  He is a formidable enemy, one whom even God’s angels don’t mess with.  In Jude we find Michael the archangel disputing with Satan over the body of Moses, and Michael does not oppose him directly but says to him, “God will rebuke you.”  In short, we by ourselves, are no match for him.

It is our responsibility in life to look at the things around us that we allow to touch our lives, and to make honest assessments of their godliness and appropriateness in our hearts.  Are the movies we watch something that Jesus would be comfortable watching with us?  Are the people we call friends the kind of people that Jesus would call friends?  Some of our answers may make us uncomfortable.  When I look back on how much things have changed during my lifetime in the entertainment industry alone, it is stunning.  What was once censored out of a broadcast, is now applauded as great television.  It is even creeping into what is called the “Christian” or “faith-based” film genre.  F-bombs in a Christian movie?  The idea is abhorrent to me.

And now we deal with an additional set of issues in the church.  Political correctness has crept in and is skewing and blurring the line between what is considered sin and what is considered an acceptable behavior or lifestyle.  We are beginning to redefine things that God clearly set in place for a reason, and we will pay the price.  For example, gender identity is now considered to be fluid and that we should allow the child to make up their own mind as they grow up.  We praise the child who wants to undergo the medical transformation to change their biological status.  But we ignore that simple fact that 30-45 % of all those who choose to undergo that surgical process will commit suicide.  All the while Satan smiles.

The key to it all is to have a steady intake of God’s Word.  He has said that His Word will not go out from Him and return empty or void.  It will have an effect on anyone it touches.  I have met relatively few people who have even read the Bible through one time, or who profess to have a daily time of study of God’s Word.  You want to change a heart or touch the world?  Read your Bible.  Start there, and everything else will fall into place.  I am afraid we as Christians try to take short cuts.  We put the cart before the horse by telling ourselves that we must do this or that religious thing, rather than developing a genuine relationship with a Holy God.  It is when we walk close to God, when we have been exposed to His Word and allowed the Holy Spirit to convict us of our shortcomings, that we begin to see the hand of Satan in our world and avoid his pitfalls effectively, as well as warn others of the problems.

Satan’s Packaging Company is a worldwide business, touching everything imaginable.  We need to carefully read the labels on everything that we allow into our lives and assess the ingredients as holy or unholy, godly or ungodly, and govern our lives accordingly.