"Whatever you do in word or deed, do all in the name of the Lord Jesus, giving thanks to God the Father through Him." —Colossians 3:17

Giving thanks to God should not just be a one day a year holiday tradition.  God is worthy of much more than that.  He is generous beyond measure, although we often overlook many of the things He gives or we take them for granted.  The truth is, God owes us nothing.  We don’t deserve anything from Him, and yet His love overflows in generosity.  In the Old Testament Law we find a fascinating system of sacrifices that God required of the people to atone for sin.  Complex and specific, they were to be carefully presented.  One, however, was optional.  It was specifically designed as a proper method for the Jewish worshipper of that day to express thanksgiving to God.  Known as the Fellowship Offering, it was truly unique.  A time of family celebration of the good things that God had wrought in their lives. 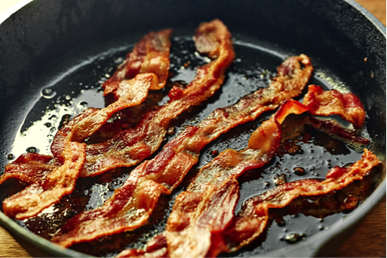 Few things smell as wonderful as frying bacon.  I usually present this lesson, talking as I normally might, but all the while, frying bacon in the skillet on the table before me.  It doesn’t take long for the aroma to fill every corner of the building.  Fry enough bacon for everyone to have a sample at the end of the lesson.  I usually cut it into shorter lengths than what normally comes in a package of bacon.  It makes it easier to fry and easier to give out at the end.

The passage in the Bible that describes this sacrifice in detail is found in Leviticus 3.  It is strikingly different from the Burnt Offering or the Sin Offering.  I often wish that we could have been present to witness the offerings described in the Old Testament.  They effectively bombarded all of the senses with information.  There, of course, was what was visible, what the worshipper saw.  As the individual bringing the sacrifice placed their hand upon the forehead of the animal presented, they felt the hair and the movement of that sacrifice.  No doubt, they would have also heard sounds.  Barnyard animal are not known to be totally silent.  The crackling of the fire, the butchering of the animals—all can be identified with certain inescapable sounds associated with each.  Then there are the smells.  I will be delicate here and not dwell on what animals do when stressed, but it most certainly was there.  The whole burnt offering on the altar would have smelled rather repugnant.  Burning hair or wool has a rather strong odor.  It all pointed towards a coming event, when the Messiah would voluntarily submit to a cross and die an unimaginable horrible death on our behalf.  The scene bombarded the physical senses of everyone who witnessed the event.  It would have been uncomfortable to see, hear, feel and smell.

But the Fellowship Offering included something very special and different.  You see, the priest was to butcher the animal in a unique way, specifically removing and scraping the fat from the inner parts of the animal.  The fat was to be burned upon the altar.  I have done enough BBQing to understand that burning fat smells wonderful.  Its unique aroma makes the back yard bar-b-q a wonderful experience.  This sacrifice was the one sacrifice that had a pleasant smell.  And the closest thing that I can think of to burning fat that is easily reproduced in a building, is frying bacon.  The remaining animal was to be cooked and eaten that day.  I don’t know many individuals who can eat a whole animal in one day.  The implication was that the person offering the thanksgiving sacrifice was to invite friends and relatives to share in the thanksgiving meal.  To enjoy together and remind each other of God’s goodness, and say “thank you” to Him.  So who really started the idea of a Thanksgiving meal?  The people of Israel were doing it long before Pilgrims and Indians gathered together.

So the next time you smell bacon frying, let it remind you of the Fellowship Sacrifice observed by the ancient Israelites, and whisper a thanksgiving prayer to God.