Types in the Bible, especially in the Old Testament, are always a fascinating study.  And so it is with leprosy, a dreaded skin disease of that day.  God set aside two entire chapters of Leviticus to address the issue of leprosy, even spending an entire chapter delineating the process of being cleansed from this incurable disease.  Curious.  Until you realize that leprosy, in the Old Testament, is a picture of sin.  Another truly deadly problem that, in the life of a Christian, must be dealt with.

A Picture Of An Armadillo 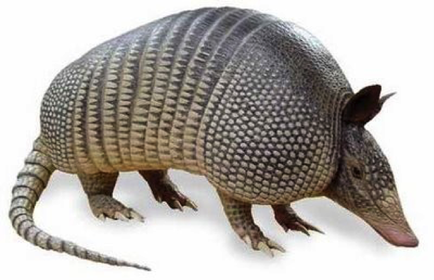 ​Here in the South, armadillos are despised creatures.  They can dig up a garden or a lawn overnight.  They are too stupid to catch in a trap, so ridding your yard of them as a pest is a challenge.  As animals go, though, they are unique.  They almost always have identical twins or quads when they give birth.  That genetic idiosyncrasy makes them excellent subjects for scientific study.  But do not try to keep one as a pet.  They also are known to carry leprosy.

The Old Testament is fascinating.  Much may seem archaic from our vantage point today, but it is the Word of God and therefore very, very special.  One of the most often overlooked, but most rewarding studies that a student of the Bible can do is to look carefully at The Law, given to Moses on Mt. Sinai.  The Old Testament if full of types, that is, parallels, to New Testament truths.  Many of the laws pointed directly at Jesus.  One in particular, though, addressed our New Testament understanding of sin.  God spent 2 complete chapters in Leviticus alone, carefully explaining the problems with leprosy and the results of the disease if found present in a person’s life.

According to the Law, if someone was found to have the disease of leprosy, they were to be cast outside the camp of Israel, and were to have no contact with anyone.  Never again to live with loved ones, never allowed to experience a comforting hug, but rather, they were required to shout, “Unclean” at people who might accidentally come near them.  To hear the diagnosis of leprosy, meant loss of social contact, loss of income and a life of destitution, and an eventual ugly death.

There are some interesting parallels between leprosy and sin.
There is an interesting clause that considers the possibility of a cure. In that eventuality, the healed individual was to appear before a priest, submit to ritual cleansing, and then sit outside his home for a week. What may seem incongruous initially begins to make sense when you contemplate the spiritual picture here. God is able to forgive us when we do wrong, but many times the sin has spoiled our reputation. The cured person was to be seated outside his dwelling for a week as a testimony to his healing. Interested or curious persons could come by and see for themselves that the individual was definitely now cleansed of leprosy. Likewise, a sinner may indeed be forgiven, but human nature is wary of those kinds of claims, until proof can be seen of a genuine change of heart. It requires time to re-establish a tarnished reputation.

God took a tremendous amount of time detailing out for Israel how to deal with leprosy.  That was no accident.  It is a picture of sin.  And sin is a very, very large concern.
PDF of Lesson