Once every two years we put on a very special banquet for our students.  It takes a bit of preparation, but is an absolutely memorable time for all.  It is promoted as a dinner theater.  We watch a pre-meal movie, serve an amazing meal, and top off the evening with some dinner theater.

But understand--this is no ordinary banquet!  Allow me to walk you through the evening.

First, as everyone arrives they are seated at tables with a few things placed on the tables.  Pencils and a few mazes generally keep them busy for a few minutes.  Here is the "Train Maze".  It is a challenge at any age!

Train Maze File
Once everyone has arrived, we give a hearty welcome and prayer and then hand out the programs for the evening.  This was our program from the last banquet.  It had several pages to it. 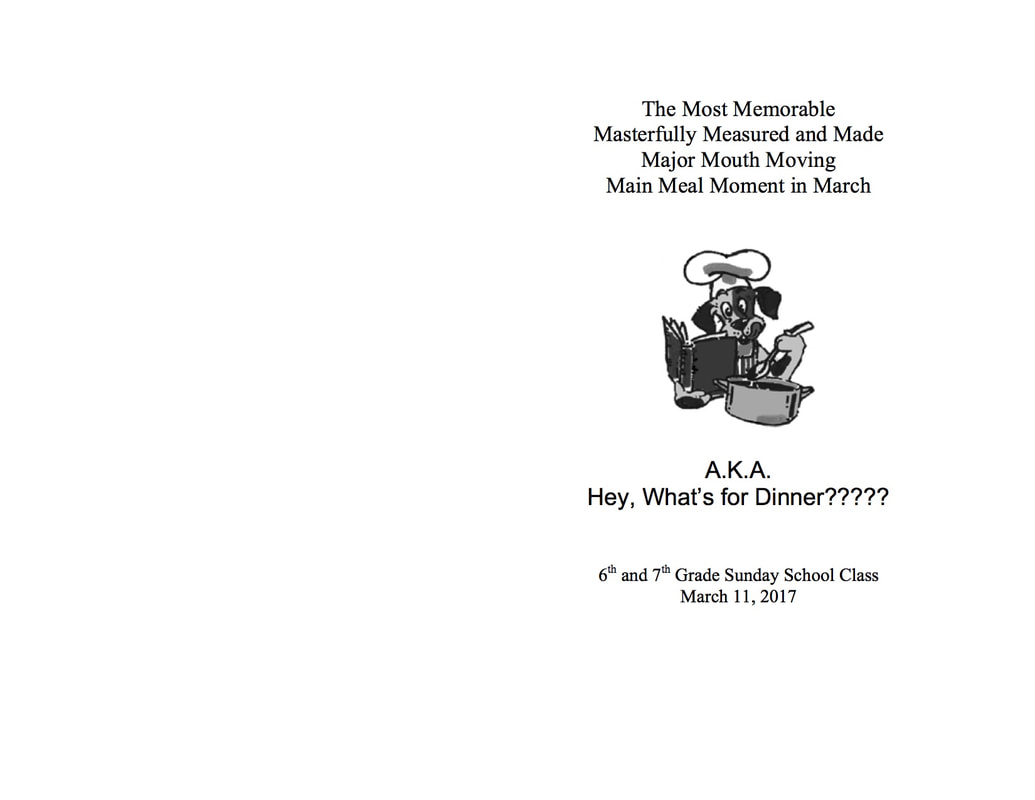 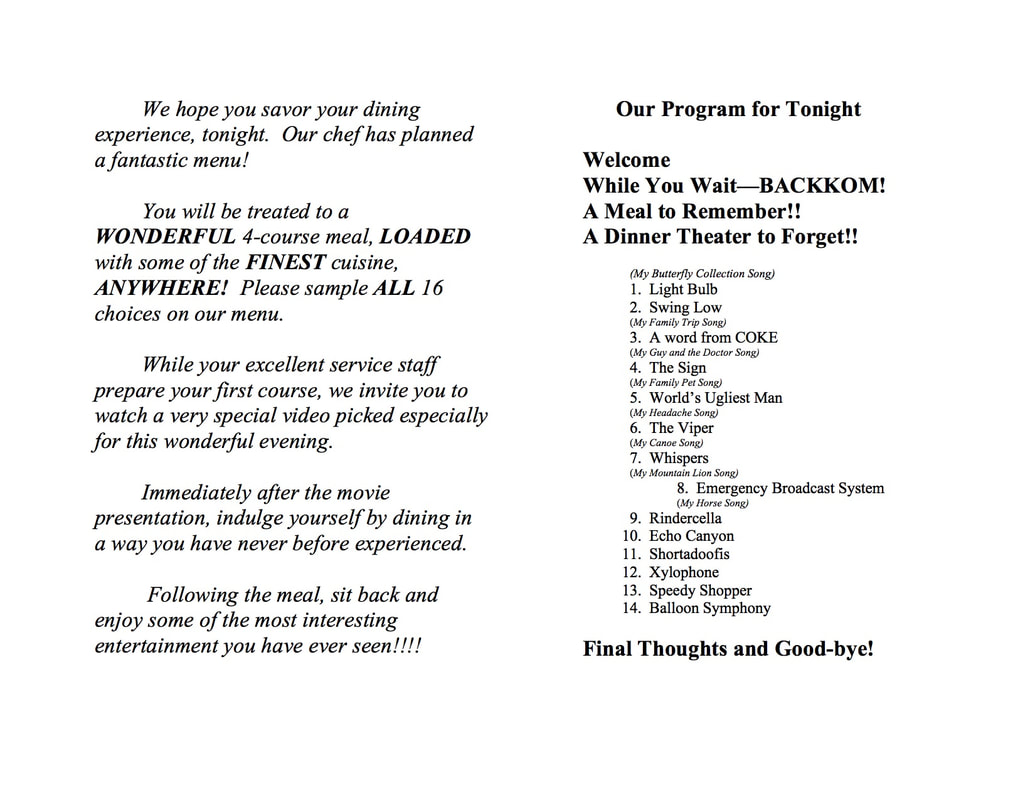 Program File
The next order of business is to have the students place their dinner orders for the evening.  This process can become quite confusing,so we take great care to explain in detail what has to happen.  Folded in the center of their program is a removable menu that looks like this. 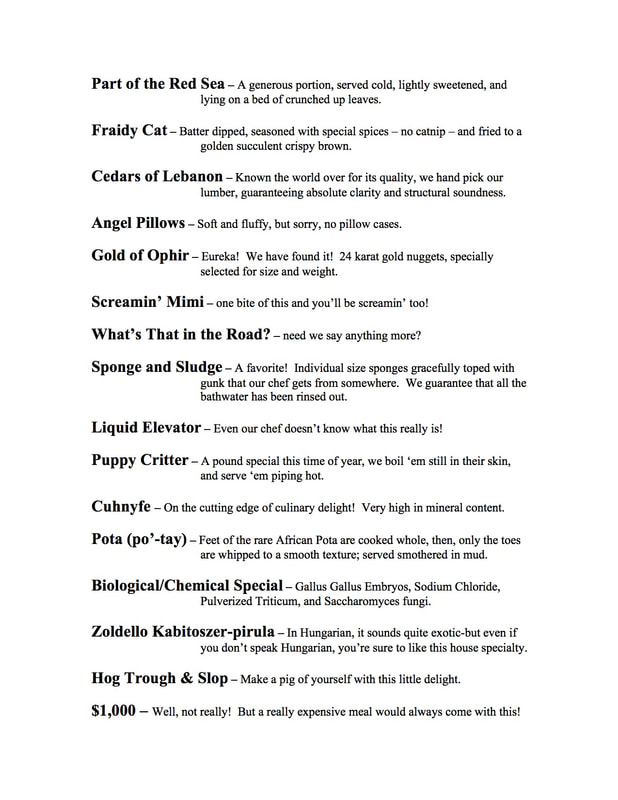 Menu File
They are not told what any of the menu items actually are, but are assured that this is like eating at a fancy foreign restaurant and even though they have no idea what things are, the food will be absolutely wonderful.   Everyone will order everything on the menu, all 16 items.  They simply need to decide in what order they want their four course meal served.  Each course will have four menu items on the plate.  With 16 items split into four courses, confusion can be controlled by a very simple method of ordering.  We use peel and stick mailing labels, pre-printed with the appropriate information.  The four course labels included in each program look something like this, printed on four 2 x 4 inch peel and stick mailing labels.  The first thing that we stress is that they must sign their name to each course label.  But they are not to peel them off of the backing. 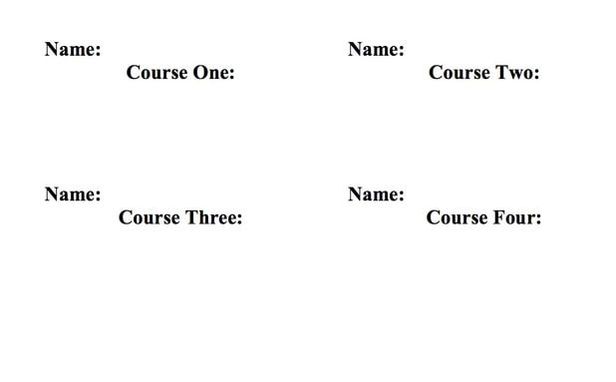 The next step is to begin placing their orders.  Each has also received a set of return address labels in their program with the food items printed on them.  They look similar to this.  They are instructed to peel off their food item and stick it on the course course tab of their choosing.  But only four per tab, and using all 16 food items in their order.
​ 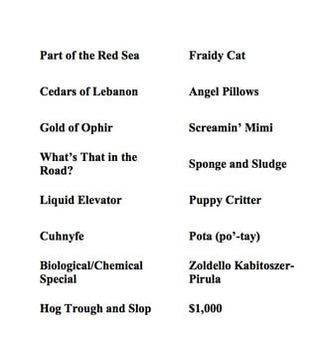 We have found it very beneficial to have adults wandering around the room helping answer questions as they arise, and making sure that each order is done correctly.  When all of the orders have been finished, we take them up and carry them off to the kitchen where a team is at the ready to begin filling the first course order.  Then I address the group with a bit of news that I quite "by accident" forgot to tell them--their silverware was on the menu!  "I certainly hope you ordered the appropriate silverware with each course, because we will be taking EVERYTHING back up at the end of each course!"

The menu items are actually:

The kitchen crew takes all of the orders and systematically peels the course Number One labels and affixes them to plates, which can then be filled with the ordered items and placed on a waiting table so that everyone can be served their courses at the same time.  Leaving the label attached, the "customer" can see what it is that they ordered and begin to figure out the menu.


While the first course is being filled in the kitchen, I play a compilation of short computer animated movies that I downloaded from a South Korean company called RG Animation Studios.  They offered free downloads in 2008 as a method of promotion.  I saved all of those old files.  The central character is a bumbling polar bear named Bakkom who fails at everything he does and has a terrible temper.  The files I have are morally clean and with no dialog, language is not an issue for anyone.  They are genuinely funny (in a Coyote and Roadrunner  sort of way).


Each old course is picked up completely and the new course brought out, until all four courses have been served.  Then it is time to sit back and enjoy the entertainment.  This consists of all of the adults playing parts in the skits for the evening.  These are much like summer camp "campfire" skits--silly, stupid, but funny.  You can include your own.  I have copied our last program for you as a starting point if you need one.

On our program you will see in parenthesis some song titles.  These were some silly songs that I sang with guitar as entertainment as the different groups were getting ready to perform their skit.  These are all of the songs that I put together and they are all sung to the same melody line--just pick one you like.

Songs PDF
And then there are the skits

​
Skits for tonight—See if there are any places where we could use your “talent”.

2.  Swing Low:  Lyle will visually interpret a song for the hearing impaired.

11.  Shorta Doofis:  A silly skit about a very short man with some very interesting physical abilities.  Lyle will do this one.

13.  Speedy shopper:  This requires audience participation and is too complicated to explain in it’s entirety.  Basically, it is a skit that requires three audience participants, and one adult.  It involves reading cans of food very quickly, looking for specific things on the label.  But there is a very funny twist to the process.

14.  Balloon symphony:  All of us.  We finish off the entertainment portion of the evening with some culture.  The Blue Danube played on piano and balloons.