And we all, who with unveiled faces contemplate the Lord’s glory, are being transformed into his image with ever-increasing glory, which comes from the Lord, who is the Spirit.  II Corinthians 3:18

We are called by God to be imitators of Christ.  We are to be looking at His example and patterning our lives after His character.  And the key to this endeavor is Bible study.  Nowhere else will we find the ingredients that will instruct us how to act and behave in a Godly fashion.  It is literally our destiny, Gods perfect plan for us--to be conformed to the image of His Son. 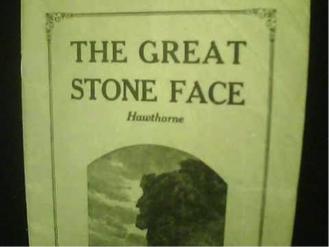 Nathaniel Hawthorne tells the tale.  A quaint story of mountains and valleys and the everyday lives of those who call the area their home, it focuses on a peculiar feature that nature seems to have put into a very prominent and key position.  Overlooking the valley, with a very tender and loving expression, is a face.  Not sculpted by human hands, it is rather a work of nature. Rocks and boulders and fissures form an easily recognizable figure—a human face.  The locals simply call it by the name it has had for millennia—The Great Stone Face.

An ancient prophecy states that one day the man who’s visage has been engraved there, would appear among them.  The story follows the life of a young boy who becomes fascinated with the face and the character it seems to display.  Anxiously he awaits the arrival of the prophetic individual, only to be disappointed at each possible turn.  Often he reflects on the tenderness and caring the face seems to portray, and his life follows that lead.

Time passes and the man, who’s likeness is fixed upon the mountain face, fails to appear.  The young boy is now an old man.  Still watching for someone who bears a resemblance to the Great Stone Face, he has patterned his life by the virtues that he was convinced that he saw in that curious mountain cleft.

The narrative ends as a stranger passing through the valley hears the story of the mountain face and its accompanying prophetic tale.  He looks carefully at the aged man, recognizes the character qualities that are apparent in his life, and announces to the residents of the valley that the prediction has come true.  The man for whom they had been searching was indeed right there before them.

As Christians, we are called to “contemplate the Lord’s glory”.  How better to do that than to read and study the Word of God, for it is there that we find the only trustworthy and honest telling of who God is and what He is like.

Like the little boy in the story, who longed to meet the person “behind” the face, we need to have that kind of hope and longing.  The young lad took note of the subtle nuances of emotion displayed in that wondrous work of nature, and eventually began patterning his own life after what he perceived to be good.  So that in the end, it was easily seen by all that he was that face—or rather, he had become that face.

Jesus lived an amazing example for us to see.  Our lives should imitate His character, His empathy, His love for others.  It is not a one time event or a single step that we take.  It is a lifetime commitment we are to make.  May we always be looking into the life of Christ, and in so doing, discovering more and more deeply the riches that He has for us to find there.  And the world will see a resemblance to the face of Christ.