​In whom ye also trusted, after that ye heard the word of truth, the gospel of your salvation: in whom also after that ye believed, ye were sealed with that Holy Spirit of promise, 14 Which is the earnest of our inheritance until the redemption of the purchased possession, unto the praise of his glory.
Ephesians 1:13-14

When we become Christians, God places part of Himself into our life.  The Holy Spirit quite literally takes up residence in our body.  And God has said that the surety, the guarantee, the earnest, of His promise of Heaven and forever is the Holy Spirit.   The implication would be, that if God were to go back on His word, He would forfeit the Holy Spirit.  And that will not happen.

A Play Called “The Real Estate Deal”
A Potted Plant
Paper Signs: Real Estate Sales R Us, For Sale, Appraisals R Me, World’s Greatest Agent Is_____, In, Out 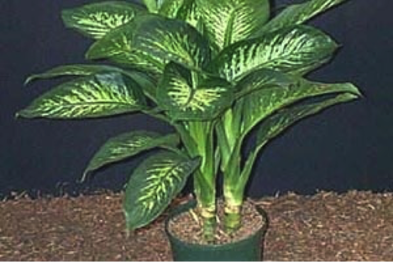 Choose 3 volunteers as actors to play the roles in the play.  They are to mime all of the actions and repeat all speaking lines in the script.  I usually read them one at a time so they have to do all of the actions, specifically the opening and closing the imaginary door.  By the way, the potted plant is the piece of real estate in question throughout the play.  I typically use a fake dieffenbachia for mine.

Once upon a time there was a young man who owned a prime piece of real estate.  It was a wonderful piece of ground in an excellent location and with unlimited potential. Now, with real estate, there are three things to consider: location, location, and, of course, location.  The particular property that we are concerning ourselves with today was in an excellent location.  Let’s take up our story here.

The young man was very proud of his real estate.  You could tell by the way he would admire it.  He would fold his arms across his chest, lean back just a bit, and say “Wow, this is a really nice piece of real estate”.  Then he would dance a little jig of happiness, and smile.  Life was good for the young man.  But the property was bare and needed something.  One day he said, “This land is bare.”  “It needs something.”  He stroked his chin as he contemplated his options.  After straining himself this way for a little while, he suddenly had a wonderful idea.  “I have a wonderful idea.”  “I know just what this land needs”, he said.  “One of the most exotic plants in the whole wide world.”  “It needs…”, he hesitated for dramatic effect, “a dieffenbachia!”  So, after locating an incredible specimen of dieffenbachia, he planted it in the middle of his property.  It must have been incredibly difficult work because when he was finished he had to find a seat to rest and catch his breath.  When he was rested, he stood up.  The young man, as was his custom, folded his arms across his chest, leaned back just a bit, and said “Wow this is an even nicer piece of real estate now with a dieffenbachia.”  And, yes, you guessed it, he danced his famous little jig of happiness and smiled.

Years went by, and the young man’s situation in life changed just a bit, and the time came when he was faced with a very difficult decision.  In order to pay his bills, he needed to sell the piece of property.  With his hands clasped tightly together near his chest, he looked longingly at the ground he had loved for so long.  He knew in his heart that he would miss his dieffenbachia the most.  A bug flew into his eye and he wiped his eyes to remove it, but everyone knew there was no bug.  He was really wiping back his tears.  With one last look, he dropped his gaze to the ground. Turning in sorrow, he shuffled along slowly as he began his search for a Real Estate Agent to help him sell the property.

He searched high.  He searched low.  Then he searched high again, just to make sure he hadn’t missed anything.  Out of the corner of his eye he spotted an agency not far from where he was.  He ran to where the Real Estate Agent was sitting and knocked on the door.  The agent answered, “Come on in”.  The young man opened the door and went in to talk to the agent about selling his property.  When he turned to close the door behind him he realized that the door was indeed just an imaginary door and really didn’t need closing after all.  But before he took his seat, he danced his little jig of happiness and smiled.  It was good to have found a Real Estate Agent.

Meanwhile, the Real Estate Agent got up from her desk, opened the door, went outside, and turned to close the door.  It was then that the Real Estate Agent remembered that the door was an imaginary door and really didn’t need to be closed.  She walked over to the piece of property that she had just listed, and placed her “For Sale’ sign right where everyone would be sure to see it very well.  Then she went back to her office.  Took out her keys, unlocked the door, and opened it, and walked inside.  She turned to close the door.  Why is it so difficult for actors to remember imaginary doors?  She sat down behind her desk and busied herself with her work.

“Hi” she said to the agent.  “Hi” she said back.  She pointed in the direction of the property with the “For Sale” sign on it and said “I want to buy that property”  Her next question was expected.  “How much is it?”  The Real Estate Agent said “$500,000”  “Wow” she said, “That seems a little high.”  With that, she got up, opened the door, stepped out of the agent’s office, and as she turned to close it she remembered that the door was imaginary, and didn’t need to be closed.   Now she was searching for something.  She looked high.   She looked low.  She looked high again, just in case she might have missed something.  Then she saw him, an appraiser, standing off in the corner.  She quickly made her way over to him.

“I need an appraisal” she told him. “I can do that” he replied.  “Come with me” she said.  “I’ll show you the property that I would like to buy.”  The two of them walked over to the piece of real estate.  The appraiser looked the property over very, very carefully.  He sniffed the dirt. He stuck his fingers in the dirt.  He looked at the land from all sides.  He walked around and around the property, all the while stroking his chin—deep in thought.  “Hah!”  he said.   Then he wrote a number on a piece of paper and handed it to the young lady.  He then said “It’s worth about $400,000”.  “Thanks” she said.  The appraiser then went back to his corner and just stood there.

Now the young lady had the information she needed to bargain with the Real Estate Agent.  She walked over to her office.  She opened the door and went in.  Turning to close the door, she remembered that it was an imaginary door and didn’t need to be closed.  It is getting painfully obvious that actors suffer from severe short-term memory loss.  She then sat down, and told the Agent “I want to make an offer on that property”.  The agent said “How Much?”  The young lady then said “I had the land appraised.”  The agent was not surprised.  This was common business practice with potential buyers.  The young lady then said “I am offering $400,000.”  The agent then said, “Let’s make this official”.  She then got the necessary forms and began filling out the official offer form.  She had the young lady sign it on the bottom line, and then said “All we need now is earnest money in the amount of  $4,000.”  Now is when the guy who wrote this magnificent play says “Let’s stop here and talk about this $4,000 earnest money”.

I am not going to even pretend that I have an understanding of the Trinity.  I don’t.  And I seriously question anyone who says they comprehend the idea.  I am constantly amazed at the complexity of our incomprehensible God.  I fall on my face in awe in response to what He has shown us in the pages of the Bible.  The concept of the Trinity is elusive because we have no parallel with which to compare.  God the Father is spirit and cannot be seen by our physical sense of sight.  God the Son, who we know as Jesus, came to this earth and made Himself like us.  We could touch and talk to and see God in human form.  And then there is God the Holy Spirit, also a spirit.  He is a person of the Trinity, just as the Father and Son are and is not just a force as in the Star Wars concept of “may the force be with you”.  God has said through the Bible that the Three work in such perfect unison and agreement that we can call God One.  Three unique, separate, distinct, beings and yet, they are one!

At the moment of salvation, God places His Holy Spirit in the life of every believer.  He lives inside of us, comforting, teaching, guiding, and always pointing us towards the person of Jesus, showing us the perfect example of what our lives should look like.  He is a spirit and therefore, invisible.  But He is there.  So the question then becomes, “How can I know that He is there if I can’t see Him?”  I’m glad you asked.  The answer…by His power.  When we push ourselves out of the way and allow God to work through us, we can see the results around us as God accomplishes His perfect plan.  Jesus is the perfect example of how a Christian should operate and live by the power of the Holy Spirit.  Everything Jesus did, He accomplished through the Spirit.  The many miracles were result of the Holy Spirit doing what He does best.  Pointing to Jesus and proving beyond a shadow of a doubt that Jesus is the Messiah.

The Holy Spirit’s presence in our lives is paramount to our success at living the Christian life.  In addition to that, God has said that the Holy Spirit is given to us as a guarantee that everything that He has promised us regarding eternity future will come to pass.  What a guarantee.  Earnest money in a real estate deal is forfeited if the individual backs away from their promises to purchase.  God will not forfeit part of Himself.  He will complete the deal that He has made with us regarding Heaven.  It is guaranteed.

PDF of Lesson
PDF of Skit