‘Come now, let us settle the matter,’ says the Lord. ‘Though your sins are like scarlet, they shall be as white as snow; though they are red as crimson, they shall be like wool.  Isaiah 1:18

Sin is a huge issue to God.  We often fail to recognize and remember that God has attached the death penalty to sin—He feels that strongly about it.  He doesn’t rank sins like we tend to some times.  Theft is no worse than a white lie.  They are both sin and therefore completely heinous to God.  Thankfully God is a forgiving God, ready and capable to forgive all of our sin, if only we will ask. 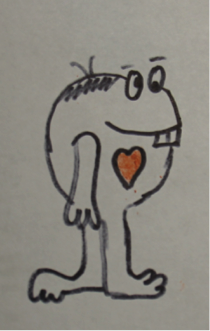 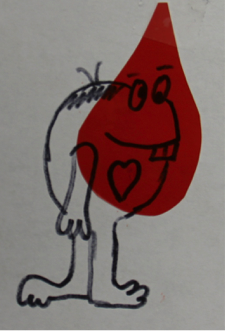 It may take a little time to find a crayon color that will work well.  On a poster paper hung on the wall, I draw a cartoon character with a body large enough that I can draw a heart on it as well.  I fill in the heart using the selected crayon, pointing out that Isaiah refers to sin as being red, not black.  The plastic sheet is cut in the shape of a large drop of blood.  If the crayon color has been selected carefully, as the drop of blood passes over the cartoon character, the heart that stood out in its red color, has effectively been cleaned.  The heart looks the same as the rest of the body of the character.

Isaiah begins his book with a Word from God to Israel, His people.  He talks to them about their sinfulness and how serious things had gotten.  In Chapter 1:5-6, he paints for them an allegorical scene.  He talks of an individual with a serious medical issue.  Imagine a person with open, oozing sores covering their entire body, from the top of the head to the sole of the foot.   Add to that the fact that the individual is not actively seeking any medical attention.  Anyone looking at a situation like this in real life would come to an ugly conclusion.  If nothing changes, the victim will die a slow, painful, hideous death.  God says that the wages, the result of unchecked sin, is death.  An excruciatingly painful death—in Hell.  All sin leads to destruction.  It is the Christian’s ever present enemy.  We must be watching for it and its effects on our lives and deal with it accordingly.

The truth about sin is not always realized at first.  It is most often very subtly introduced into our lives.  If we accept the newcomer and tolerate its presence, it will stay and very quietly grow larger and larger.  God warned Cain that he must master sin or it would master him.  We should heed the same warning.  Sin will grow and expand as we lose our sensitivity to God’s Word.  We may even begin to make excuses for our behavior, much in the same vein as an addict attempts to justify their actions.  Sin is addicting, whether we want to admit it or not.

Often the wrong that we do does not hurt initially.  It seems innocent enough, and painless—for a while.  But like the allegorical person in the passage suffering intensely from the physical issues described, sin will destroy.  The destruction will often be slow, inconvenient, embarrassing, and complete.  If only we would seek help from the Great Physician.  A number of years ago I encountered a dog.  I stepped out of the back door of my business one day and caught a glimpse of a stray dog running away from the building and disappearing into the tall grass.  Another stray, I thought.  The creek nearby seems to be a magnet for those unscrupulous people who no longer want to care for an animal and mistakenly think that the poor animals will fare well there by the water.  They don’t.  In short order, they find their way back to the first civilization they see, my business, and park themselves close by, looking for a friend or a handout.  Thinking little about it, I went back inside.

It took several months, but in due time she was a normal dog again.  She was MY dog, and no one else’s!  Moose worshipped me!  I supposed that she identified me as the one who had saved her from a horrible existence.  She was right beside me always, never disobeying my commands, placing herself within inches of my feet.  If I moved a foot or two to the right, she dutifully got up and moved to the right the appropriate amount and would then lie back down.  She was the living, breathing definition of loyalty.  Do we see our Savior in the same light?

In verse 18 the tenor of the conversation changes as God pleads with them to consider their condition.  He mentions that sin is a scarlet color.  An interesting thought.  Blood is also scarlet.  And that He can change their scarlet condition back to white—pure and clean.  We are told in I John 1:9 that all we must do is confess and He will forgive.

God has always had a hard and fast rule that without the shedding of blood there is no remission of sins.  We are also told that when we accept Jesus as our Lord and Savior, we are covered in the blood, the righteousness of Christ.  Our sins, covered or atoned by the blood of Christ, effectively disappear.  We are forgiven.  The key to the entire miraculous event is the blood of Christ.

In our culture, we don’t like to talk about such uncouth things as the blood of Christ and His suffering on the cross.  In all of my years teaching, I have had only one instance where a parent has come up to me and complained about the subject matter of one of my recent lessons.  And it was this very subject.  The parent felt that it was unnecessary to talk about Jesus’ death and suffering and shedding of blood on our behalf.  There were so many other, more positive things to talk about.  I informed her that paying for sin with blood was a central theme of the Bible and to ignore it was to do my class a disservice.

Jesus voluntarily endured a tremendously ugly, hideous death to pay for my sins.  It shows me just how much God disdains sin and its effects.