I am astonished that you are so quickly deserting the one who called you to live in the grace of Christ and are turning to a different gospel-- which is really no gospel at all. Evidently some people are throwing you into confusion and are trying to pervert the gospel of Christ.
Galatians 1:6-7

God has been very definitive and honest in the Bible about right and wrong.  He has displayed, many times in graphic detail, what sin looks like and where it leads.  An honest study of His Word leaves little guesswork when it comes to discerning absolute righteousness.  But our human nature is questioning.  Much like a bull fenced in a pasture, we test the fences, seeing how hard we can push or how far we can reach through before we get reprimanded or hurt.  Fences work two ways.  They keep us in, but sometimes more importantly, they keep unwanted things out as well.  Sexual promiscuity and STD’s.  Alcohol and addiction.  Pornography and addiction.  God says "No” for more reason that a “just because I say so”.  Sin unchecked ultimately destroys. 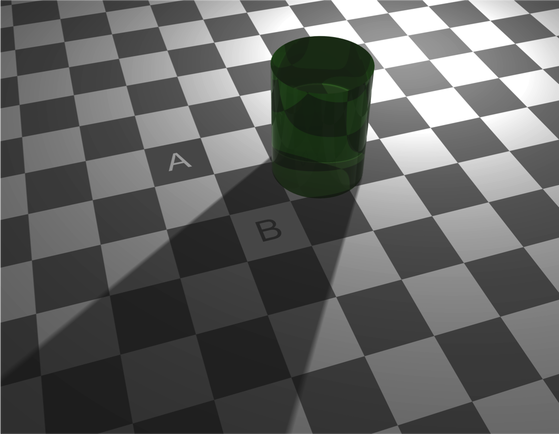 I had this photo blown up to 3 feet by 4 feet poster so I could put in on a stand for demonstration purposes.  If you have never seen this before, believe it or not, square “A” and square “B” are exactly the same shade of gray!  I had my printer create an extra square “A” that I attached to a long stick.  I can then literally move square “A” over to where square “B” is located and prove that they are indeed identical in shade.

God has much to say about right and wrong in the Bible.  Interestingly, I can find no place where He condones situational ethics in any shape or form.  God has a sincere list of right and wrong.  It is vividly black and white—clearly detailed and explained, but our sin nature is always looking for an excuse or a reason to doubt God’s commands.  And they are commands, by the way, not mere suggestions.  He has delineated good from bad, right from wrong, and acceptable from inappropriate.

Sometimes we might have the tendency to look at the Word of God as a list of “Thou shalt not’s.”  An honest look through the Scripture does point to a large number of warnings and dire predictions for disobedience.  We need the warnings, because we tend to ignore the rules.  I was taught by my father to be very cautious buying a used car from anywhere very far north.  Winter weather results in the application of a salt mixture to the roads to melt the ice and snow, and if the residue is not intentionally washed off regularly, the result is a slow decay of rust.  Our compromising with the world around us can work that very same way, slowly creeping in and if unchecked, surely causing eventual catastrophic damage.

Compromise can be disastrous for even the most Godly of believers.  We can never claim immunity from the temptation of sin.  As I read through the Bible, I find God has recorded both the good and the bad concerning the lives of many of the heroes mentioned in Scripture.  God does not white wash their lives, but gives us the entire story as an example to us of what can happen if we are asleep at the wheel in regards to Satan’s efforts in our lives.

Satan sets snares to catch the unsuspecting Christian.  Snares are, by design, difficult to perceive if the intended target is not constantly vigil.  I have over the years had a few instances of nuisance wild animals around the house.  Setting live traps to capture and relocate these creatures is a challenge.  They are wary of everything that does not look normal and familiar to them.  We likewise, should be so familiar with God’s Word that we recognize immediately when something does not look quite right or normal and avoid being caught in the trap.  I make my traps as enticing as I possibly can, adding food and placing them as conveniently as possible for the animal to consider.  Satan uses the identical game plan.  He knows what works and uses the perfect bait for his prey, placing it at a very handy location.

We are especially susceptible to compromise through wrong relationships.  We develop friendships with those who can, and will, drag us down.  It is a fine balance between showing Christian love and embracing sin.  We are told in the New Testament that they will know we are Christians by our love for one another.  And that is indeed true.  But at what point do we identify unacceptable sin in another person’s life and say, “I cannot condone, nor accept what you are doing because your actions might be interpreted as acceptable and be imitated by another person who is watching.”  Paul addressed more than once the sexual sins that were being tolerated in the local churches.  We still struggle with that very issue today.

Satan is an expert in gray.  He can take a large amount of good, mix in a little bit of bad, and entice us with the deadly mixture.  As we respond to Satan’s ploys, he gradually leads us into the shaded area on the picture.  And before we realize, we are living in a false reality.  We look at square “B” and tell ourselves it must be OK.  But it’s not.  The first things that come to my mind are the behaviors that are not just tolerated by society today, but proclaimed to be worthy of notable praise.  Sins that God chastised Israel for many years ago, are hailed by our society today.  Homosexuality, single gender marriages, fluid gender identity, abortion, sexual promiscuity—all were clearly proclaimed wrong by God, and yet we see even in the church today, acceptance and support. When will we return to the original black and white checkerboard of what is truly right and wrong?  Or will we continue in the Satanic shadows in our culture.