This parable is a remarkable telling of a story that gives a beautiful picture of our Father in Heaven and His great love for us.  We are the foolish young boy who mistreats his father, and turns his back on everything he was ever taught, to go his selfish way, only to meet a troubled end.  But we have a loving Father who is looking for our return and accepts us with open arms when we repent and come back to Him.


The Object and Lesson 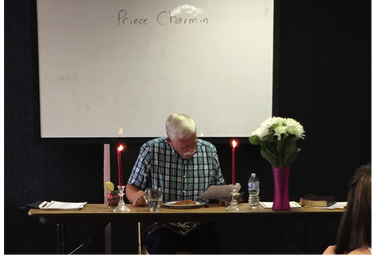 This lesson is a retelling of the story of the Prodigal Son.  It is a play on the name “Prince Charming”.  We drop the “g” and have a story about Prince Charmin, and the king of the toilet paper world.  I typically have a narrator read the poem while I act everything out.  When I have the help, I add the music into it just to add a little flair.  Here is the play with my production notes added so you can see how I tell the story.  (One very important production note:  remove the label from the dog food and place it on the can of real potted meat.  The idea is to convince those watching that you are going to eat dog food in your hunger.  Potted meat has enough of a smell that many will actual think it is real dog food.)

I always begin and end with some ridiculous credits.  I take my inspiration from movies that sometimes seem to have endless opening credits.  Typically, I will have printed up or made into a Power Point this list.  (And of course personally taking credit for each.)


(Opening credits begin as music begins playing Favorite Hits Disc 1 track 3.  These credits may take a while.  The song is 3 minutes in length, so it should last long enough.  Music fades down as credits end.  Narrator then begins reading.  Get Kansas track 1 ready.)

Won’t you sit back, folks,
And let me tell you a tale
About two boys and their dad.
Oh, their life was good
But there was this one
Very big problem they had.

You see, Dad worked in paper
Paper in rolls.
Rolls that you’d hang on the wall
You know the kind.
That special room?
With a porcelain fixture in a stall?

Yes, Dad was the king
Of the Toilet Paper World.
His success shouldn’t be too alarmin’.
And between his two boys
The one we will meet
Is the one they called “Prince Charmin”

He was quite a boy.
He was stubborn and proud.

“I don’t want to live under Dad’s controls”
So he gathered is courage
Walked up to his dad and said,
“Dad, you ain’t dead yet?  I want my rolls”

The king was sad
To see him behave this way
But gave him his roll with a look of pity
The prince grabbed it up
And turned with a shout and said,
“Woo hoo!  Party City.”

(Bring music up nice and loud: Kansas track 1.  Wait until Lyle arrives at Party City, then fade music down a little, but keep it going.  The narrator then begins reading.)

What a time he had
With all that were there
And his family he did not miss.
He took out his roll
And said to all there.
“Hey Y’all, look at this!”

(Bring the music back up.  Lyle will bring out the leaf blower and unroll an entire roll of toilet paper into the audience.  Wait until the roll is completely unrolled, then fade music out entirely.  Narrator waits until things in the classroom have calmed down a bit, then begins reading again.  Get Carpenters track 17 ready.)


But it didn’t take long
And the whole roll was gone
And the party soon came to an end.
The prince looked here at there
Then sadly exclaimed,
“No one has a roll they can lend.”

It was then that he saw
For the very first time
That all of his friends had gone home
He was utterly broke
No roll at all
And totally, completely alone.
He looked for a job
To have food and a roof
But there was none to be had.
Except feeding farm critters

(The next line is voiced by another actor off stage)

“Hey kid, feed the pigs and the dog”
And that was disgusting and bad.

His stomach was empty
All the food was long gone
He was an extremely hungry young man
And all he could find
Was food for some dogs
“Mystery meat with gravy, in a Mighty Dog can.”

(Music comes up:  Carpenters track 17.  While the music plays on, Lyle will go through a rather lengthy table set up procedure.  When he has his dinner all set up, fade music down a bit and the Narrator begins reading again.)
The first bite was awful

(At this point Lyle will ad lib something about that not being in the script, but you can show him that it is.  Then repeat that last line.)

The first bite was awful

(Lyle will still ad lib a protest but finally give in and take a bite.  After he has chewed and swallowed the first bite the narrator reads again.)

The second was worse

(Lyle will turn and look at you in disbelief.  Say something like Hey, you wrote this stuff.  Lyle will take his second bite.)

“Gah! How can dogs eat this stuff?”
Putting the fork down
He thought about home
And how at home he’d always had enough.
So he humbled himself
And started for home
Leaving that scrumptious dog food behind
“I’ll tell Dad I’m sorry
And I’ll beg him for mercy.
In the past he’s always been kind.”


But before he got home
When he was still far away
The king saw him and could hardly control
“Go quickly,” he said,
“Get everything ready,
Load the royal canon and lob him a roll.”

(TP King hands canon operator a roll, who then loads it and gets ready to fire.)

(Shoot the roll of TP at Lyle)

And a puff of smoke
That roll flew high into the air.
Prince Charmin reached up
And caught it with ease
And said “Dad really does care!”

(Lyle and the King “man hug” each other)

So what more can I tell
Of this wonderful sight
The prince and the king now together
It took a roll and a can
To make the prince a real man,
And now they live happily forever and ever.


Ending credits are much like opening ones except I am not mentioned in them.  They run as follows:  No Animals Were Harmed In The Making Of This Documentary, Any Similarity, Between the Characters, In This Documentary, And Real Life, Is Purely Coincidental, This Is Not, Intended To Portray, A Real Life Situation, And It Is  A Total Fabrication, Of Reality, Which Is Pretty Much, The Way Mr. Lyle Lives Life Anyway, So Don’t Let It Bother You Too Much, Just Humor Him, And Ask Him, To Take His Medication, So That This Doesn’t Happen, AGAIN!!!!!, The END.


From here, a regular look at the story of the Prodigal Son would be in order.

PDF of Lesson
PDF of Play