He is the one we proclaim, admonishing and teaching everyone with all wisdom, so that we may present everyone fully mature in Christ.  Colossians 1:28

Seeing life from God’s perspective is one of the greatest challenges we face as Christians.  He has an overall plan for our lives and knows what is best for us.  We are selfish beings and tend to choose the direction that may be the most pleasant to us, with little regard for what is really at stake.  We are in a spiritual battle.  A very real fight that we cannot deny. 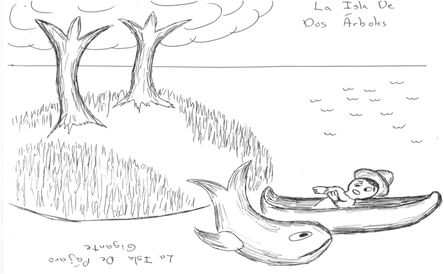 ​With some effort, you can learn to draw this picture on a large poster board.  It is worth the time!  Practice until you can do it consistently.  There is a story that goes with the picture.  I draw the picture as I am telling the story.  But you can tell the story with the picture complete.  I also hand out to each listener, a copy of this picture to take home with them.  When it is turned upside down, it takes on a whole new look.

This is the simple story of a man named Jose.  You see, Jose lived in New York City his entire life, working in a high-rise office building.  He walked every day to work and then at the end of the day, he would walk home.  That was his life.  Work and home again.  But Jose held a dream in his heart that he would never let go.  Jose loved the outdoors.  He loved nature.  But he especially loved the ocean.  Oh how he wished that he could some day live on his own private island and enjoy the carefree life of an island dweller in the Caribbean.  That thought kept him going.  And as he got older, he wished all the more for his dream to come true.

Jose continued to work in New York City with his island ever present in his thoughts.  As he neared retirement, he put a bold plan into action.  Contacting a real estate agent, he informed her of his dream of a Caribbean island.  He told her to spare no expense to find a way to fulfill his life long desire.  She informed Jose that private islands in the Caribbean were very few, and that to find one that was for sale might be very difficult and take much time.  But Jose was determined, and urged her to begin looking for the island of his dreams.

It wasn’t long before Jose heard from his real estate agent again.  She had great news.  She had found an island exactly as he wished for, and he could purchase it for a great discount, as it had been on the market for a very long time, with no interested buyers.  But, she said, he would have to purchase it “sight unseen”.  That didn’t bother Jose one bit.  His excitement welled up as he thought about living out his days on his very own private island in the balmy waters of the Caribbean Sea.  He could hardly wait for retirement.

Retirement day came at last, and Jose could hardly contain his excitement.  Hurriedly he sold most of what he had, bought a plane ticket for his island, and waved goodbye to the city he had lived in for so many years.  The Caribbean at last!

Jose’s island was too small for a landing strip for an airplane, so he gladly landed on the big island nearby.  He thought it would be fairly simple to get someone from there to chauffer him by boat to his island.  But he was sadly mistaken.  As he walked around looking for someone to carry him across the waters, he was met with looks of shock and dismay.  As he explained that he had recently purchased the little island that could barely be seen on the western horizon, the local islanders exclaimed that it was a horrible idea for him to even consider going near the island!  They were adamant that he should never visit his island and simply turn around and go home.  Jose’s response to them was, ”It is all a matter of perspective, my friends.”  They would shrug their shoulders in disbelief and walk away shaking their heads.  But Jose was not going to give up on his dream that easily.

He finally found someone who consented to take him near his island, maybe a hundred yards away, but certainly not going ashore with him.  People from all over the big island kept coming up to him, begging and pleading with him to not go over to that cursed island.  They kept talking as if he would die there almost immediately, but again he said with a smile, ”It is all a matter of perspective, my friends, it is all a matter of perspective.”  The local islanders shrugged their shoulders and would walk away shaking their heads, mumbling about getting things ready to have a funeral.

The sun sparkled on the glistening waves as the little taxi boat approached Jose’s little island.  He could see it clearly now.  It had two massive trees growing right in the middle.  He decided then and there that the most appropriate name for his new piece of real estate would be “La Isla De Dos Arboles”, “The Island of Two Trees.”

His excitement grew as he thought about how he would be able to stretch a hammock between the two trees and rest, with the balmy ocean breeze gently cooling him as he lay in the shade.  It was going to be absolutely amazing.  But he was abruptly brought out of his thoughts as the boat owner informed him that he would have to swim the last one hundred yards to shore.  He wasn’t going to take any chances getting too near that island.  He made one last gesture to try to convince Jose that moving to the island was a terrible idea, but again Jose’s answer was the same, ”It is all a matter of perspective, my friend, it is all a matter of perspective.”  Once Jose was in the water, he sped off for fear of his life, shaking his head, certain that Jose would soon die.

Living on “La Isla De Dos Arboles” was a wondrous experience for Jose.  He would sit for hours in the shade of those two mighty trees and listen to the waves crash on the shore.  The balmy ocean breeze gently fluttering across the island always put a smile on his face.  It was just as he imagined it would be. All those years working in New York City were soon forgotten.

As you can see, two huge trees dominated the little island.  They stood proud and tall.  From between them ran a quaint little path down to the shoreline.  Jose would walk down to the water often, sometimes even wading out into the water a bit.  And from time to time, an islander from the big island would row out into the bay and yell to Jose, “Jose, are you still alive?”  And Jose would answer, ”Yes mi amigo, I am fine.”  The next question was always the same.  “But how can you live on that island and survive?”  And Jose would promptly answer with a smile and a wave, “It is all a matter of perspective, my friend, it is all a matter of perspective.”  Then the visitor would hurriedly leave the area, for fear of their own life.

The locals on the big island held that Jose’s island was inhabited by a ferocious, man-eating creature.  Their fear was well founded, as many had perished simply visiting the island.  But Jose seemed to be thriving there, and they could not understand how that could be, when so many before had disappeared.  Jose seemed unfazed by the monster and that only heightened their curiosity.  More and more often they would row out to see him, but not too close for fear of the monster, and they would yell, “Jose, Jose, are you still alive?  Has the monster eaten you?”  Jose would smile and wave, “No, mi amigos, I am fine.  As for the monster, it is all a matter of perspective, my friends, it is all a matter of perspective.”  And as always, they hurriedly rowed away, shaking their heads as they went, wondering how Jose could survive for so long on that cursed island.

It wasn’t long before Jose bought a canoe.  How he enjoyed paddling around his island in the afternoon sunshine.  One day, however, a huge fish was hiding in the shallows near Jose’s boat, and as he pushed out from the shore, it was startled.  With a mighty swish of its tail, it leapt from the water, very near to Jose.  The splash startled him at first, but when he realized what it was, he made an effort to make friends with the fish.  Before long, the two of them played every day there in the shallow water.  It was an amazing sight, Jose in his boat, wearing that silly hat, and the giant fish splashing about, trying to get Jose wet.  And Jose, being the good friend he was, played along with the fish, pretending to be surprised each time it would jump.

P.S.  The inhabitants of the big island never understood how Jose survived living on that island.  It actually was a cursed island!  Never doubt that there was, indeed, a ferocious, man-eating monster that stalked that little island!  A hideous monster did live there, and was so tall and huge that you could not miss him.  The islanders had a name for the beast.  They called it Pajaro Gigante.  In fact they named the whole island after him.  Their name for Jose’s little patch of paradise was “La Isla De Pajaro Gigante”, “The Island of The Giant Bird”.  But you don’t see him do you?  You are seeing the island from Jose’s perspective, a beautiful, wonderful paradise.  Let me show you this same picture from a slightly different perspective.  As it is turned upside down, now you can see what the islanders saw each day.  Do you understand their concern for Jose?  There really is a giant bird monster, and he is eating Jose for lunch!

You and I live in a very dangerous, cursed world.  For the Christian, there are often times when life is hard and unfair.  How we deal with those issues is important.  We can look at life from the perspective of the islanders and be afraid of a man-eating monster, or we can look at life from Jose’s perspective, and have joy, even in the hard times.