Make Believe Rifle
(Giving God All)
(The Will Of God)

‘Submit to God and be at peace with him; in this way prosperity will come to you.  Job 22:21

Submission to God is far more than just agreeing with God that we need to be doing His will.  It also entails doing it.  God doesn’t want just a small portion of our commitment.  He wants our everything.  We are not to hold back in reserve anything from Him.  Often, we know what we should do, but we hesitate, not entirely confident that God will supply everything we need.  It requires our trust in Him, and that comes with practice. 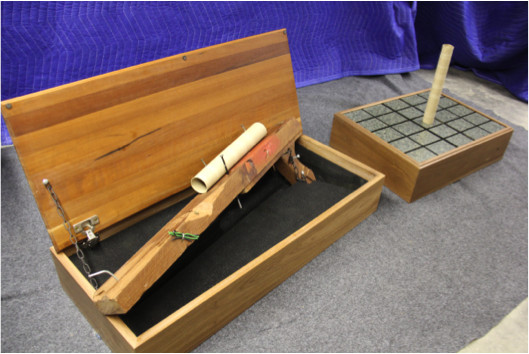 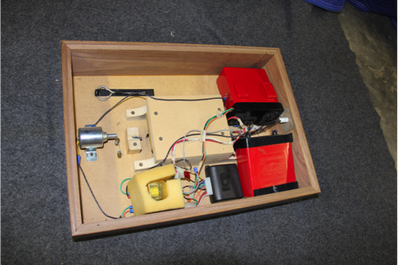 This object may take some time and skill to fabricate.  Essentially it involves making a hideous looking toy rifle out of a 2x4 with bent nails and screws, chunks of wood missing, and various miscellaneous parts.  The worse it looks, the better.  Hidden in the handle of the rifle is an automotive remote control that is activated when the trigger is pulled.  That remote control activates a solenoid in the target platform causing a rat trap to trigger, hitting the target and sending it flying.  The process is so quick, it looks as if the rifle actually fired and hit the target.  The entire target platform is a 12 volt system, so automotive controls and solenoids will work together nicely with 2 6 volt batteries wired in series in the platform box.

I realize that in the politically correct world that we live in, guns and such are often frowned upon.  But I live in a southern culture where ownership of firearms is celebrated.  I will continue that celebration as long as I have the 2nd Amendment.

To be honest, I am not much of a hunter.  Sitting out in the cold and wet waiting for a wild animal to come along just isn’t something I enjoy much.  But target shooting, now there is something I can enjoy.  I guess it all came from my self appointed occupation as a young teenager in Kansas.  We lived out in the country, but we were not farmers in the traditional sense.  Our family farmed a few catfish, mostly just for us to eat as a family.  When other people grew up eating fried chicken or pot roast for a Sunday noon meal, I learned to expect deep fried catfish.

We would typically buy our stocking fish from a hatchery, and because my parents didn’t want to spend the extra money for larger fish, they always bought “fingerlings”.  These were minnow sized creatures, and easy prey for bullfrogs, turtles, small mammals, and larger fish.  I would often sit out on the banks of our ponds with my 22 caliber rifle and shoot any creature that stuck its head out of the water.  Turtles were especially troublesome, and a turtle head just sticking above the water is a target about the size of a nickel up to a quarter.  From 50 yards out, it was difficult for me to hit them, but I found the challenge entertaining.

I have with me today a make believe rifle.  It has no caliber, because it has no bore.  It is entirely a toy, and a very, very sad looking toy at that.  It is made from an old piece of cedar 2x4 that has seen its better days.  It has been cut, chipped up, painted on and used as a crowbar.  I will admit that it looks extremely sorry.  You would think that a woodworker would be able to build something better than this.  But this is what I have and this will do nicely.

Over here, I have a target.  I am gong to stand this center roll from a roll of paper towels vertical on this stand, way over here on the other side of the room.  And today I am going to show just how good a shot I am with this make believe rifle.  You do understand that it shoots make believe bullets, right?  Where they come out of is anybody’s guess, but it really doesn’t matter, because the premise is that this is an entirely make believe rifle.

Isn’t that the way we are in life sometimes.  We get all ready to do God’s work and when it comes time to pull the trigger and jump in and start…we hold back.  We keep the safety on just in case something might go wrong.  Submitting to God means that we take the safety off on life.  We don’t hold back anything.  We trust completely that when we do our part, God will do His part.  And His part is far larger and more important than anything we might be adding.  We must be willing to make ourselves available to Him at all costs.  Carrying a gun with the safety on is a must for handling a gun safely.  But in life, take the safety off and boldly step out in faith.

Let’s try this again with the safety off, and see if the impossible can happen.  I aim my make believe rifle loaded with make believe bullets, and pull the trigger and…POW.  Can you believe what just happened?  That make believe bullet hit the target so hard it flew all the way back to here.  Impressive!

Give God your all.  Don’t hold back.  Carelessly handle life with the safety off.  Trust God.