‘For the kingdom of heaven is like a landowner who went out early in the morning to hire workers for his vineyard. 2 He agreed to pay them a denarius[a] for the day and sent them into his vineyard.  3 ‘About nine in the morning he went out and saw others standing in the market-place doing nothing. 4 He told them, “You also go and work in my vineyard, and I will pay you whatever is right.” 5 So they went.  He went out again about noon and about three in the afternoon and did the same thing. 6 About five in the afternoon he went out and found still others standing around. He asked them, “Why have you been standing here all day long doing nothing?” 7 ‘“Because no one has hired us,” they answered.  ‘He said to them, “You also go and work in my vineyard.”  8 ‘When evening came, the owner of the vineyard said to his foreman, “Call the workers and pay them their wages, beginning with the last ones hired and going on to the first.”  9 ‘The workers who were hired about five in the afternoon came and each received a denarius. 10 So when those came who were hired first, they expected to receive more. But each one of them also received a denarius. 11 When they received it, they began to grumble against the landowner. 12 “These who were hired last worked only one hour,” they said, “and you have made them equal to us who have borne the burden of the work and the heat of the day.”  13 ‘But he answered one of them, “I am not being unfair to you, friend. Didn’t you agree to work for a denarius? 14 Take your pay and go. I want to give the one who was hired last the same as I gave you. 15 Don’t I have the right to do what I want with my own money? Or are you envious because I am generous?” 16 ‘So the last will be first, and the first will be last.’   Matthew 20:1-16

Jesus, the greatest teacher the world has ever known, taught the general public using parables exclusively.  In this parable, commonly known as the Parable of the Workers in the Vineyard, are several truths here to be seen for the Christian.  First, God is very fair and generous.  Second, He expects us to work.  He has a job for each of us to do.  Thirdly, He came looking for us.  He did not just put up a help wanted sign and wait for us to come around.  God is actively involved in all of our lives.  And maybe most importantly we learn from this parable that God is sovereign.  He does what He chooses.  He is not bound by our expectations or wishes. 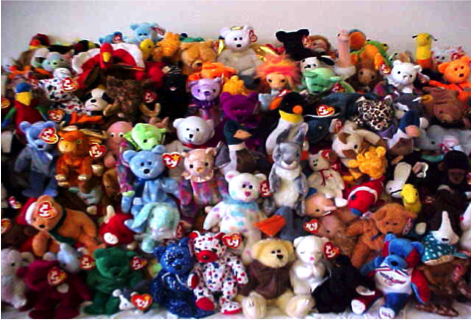 COTSA is an acronym for Celebration Of The Stuffed Animals.  It is a made up holiday divided into three parts.  The FOTSA, MOTSA, and PFTMOTSA.  FOTSA stands for the “Finding of the stuffed animals.”  The MOTSA refers to the “Moving of the stuffed animals.”  And the PFTMOTSA is known as the “Paying for the moving of the stuffed animals.”  I typically hand out a job application form to those who wish to apply for the job of MOTSA, as it is a paid position.  The form has some absolutely ridiculous questions on it that I simply use to work my way to “a hire.”  The job typically is advertised as paying $14 per hour.  But I do not give a job description until I have picked my MOTSA.  That is when I inform them of their duties.  They are to carry the Beanie Babies from one container to the other, taking plenty of time to allow them to enjoy the trip and get a breath of fresh air.  After all, they have been cooped up in that container for years.  Picking a person who will be outgoing enough to relish this job helps a lot.  The runner up is also chosen, though at this time not hired.  They are informed that they will only be hired if for some reason the MOTSA cannot fulfill their duties as MOTSA.

We begin the COTSA.  I introduce each component as we get to it.

The FOTSA:  I have taken care of this earlier when I found the container at my house.

The MOTSA:  The timer is started, and the process of MOTSA begins.  I usually have this going on behind me while I give the Bible lesson, occasionally checking on progress, or commenting on a particular animal being transported at that moment.  It’s a bit distracting, but the end result is worth it.  I am constantly monitoring their progress.  If it looks like the MOTSA is moving through the container quicker than my lesson, I slow them down, explaining that they are being paid by the hour and I want the Beanie Babies to enjoy their time out of the container.  This will go on for a half hour or more.  All the while, we are looking at the parable and discussing its meaning.

Near the end of my lesson on this passage with only a minute or two left, I call up the runner up and ask them if they will help move the remaining Beanie Babies, as we are running out of time.  Both carriers grab handfuls at a time and hurriedly finish transferring all of the creatures to their new home.  Then the timer is stopped.  I send the first runner up back to their seat.  A little math is done, and wages for the MOTSA is calculated, always rounding up very generously.

The PFTMOTSA:  This is where you will usually get a real life reaction to the truth of the parable.  I pay the MOTSA very ceremoniously for their work, praising them for a job well done, and maybe even including an extra tip.  The last time I did this I paid the MOTSA $10.  The look on their faces as they receive a huge payment is pretty cool.  Then I call the first runner up to come forward.  I also praise them for a job well done.  And I tell them that although they only worked a minute or two, they did as I had asked, and in my generosity, I will pay them $10 as well.  The looks of disbelief from the class and, very often, from the MOTSA are priceless!  I can then segue back to the parable and explain again what the landowner did as he dealt with his workers.  He paid even those that had worked only a short while the same as those who had worked the entire day.  He was fair, generous, and he had the right to be so.  Can we expect God to be any different.

The parable in question is commonly known as the Parable of the Workers in the Vineyard.  It showcases for us a few of the character traits that our Father in Heaven exhibits in our lives.  We see a wealthy landowner hiring workers to work in his vineyard for the day.  And as the day progresses, he hires more and more workers.

As we might guess, the owner represents God in the story and we are the workers.  We have been “hired” by God to work.  Work defines most of us.  There was a day that accepting charity without working for it was unthinkable.  That day has sadly passed.  We might miss the thought here that God has given us a dignified job.  He trusts us enough to grant us an opportunity to work for Him.   What an honor we have to serve Him and “earn” our keep.  I hesitate to use the word pride here, but there is a certain satisfaction that a worker feels at the end of the day when they look back at what they accomplished and feel confident of a job well done.  That is dignity, and God desires it for all of us.

In the parable, pay came at the end of the day.  The workers had to endure to the end to receive the reward.  There is no mention that anyone left early and received their pay for the day.  Our pastor took our congregation through an exegetical study of the book of Hebrews and developed a motto to reflect the content of the book, “Have Faith, Work Hard, Endure”.   It is a very appropriate thought to describe the ideal Christian life.  Our work does not clinch or sustain our salvation.  Our work is an outgrowth of it.  There is a reward for those who endure to the end.  Heaven will be an amazing place and eternity is a very, very long time.

And finally, God is sovereign.  He can do as He sees fit.  He does not answer to our set of standards, but to His own.  The pay at the end of the day in the parable does not seem fair by our mathematical calculations, but God is generous.  He doesn’t have to be “fair” by our definition of fairness.  If God were fair, we would all burn in Hell forever!  Remember that the angels do not have access to salvation and restoration from sin as we do.  Those who followed Satan in his revolt are forever doomed.  In I Peter we find mention of the angels intently watching this whole scenario of salvation play out, in awe of the One who designed and engineered it all.