The Book Of Habakkuk

God is a God of Love.  He is also a God who will do what is best for us, and sometimes that includes essentially forcing us to do things we might not like to do at the time.  But the truth is, everything God does is for our ultimate good.

A Play Called “The Trial Of Gill Teeman” 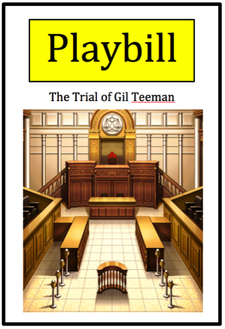 The Trial of Gill Teeman

Bailiff:  All rise.  The honorable Judge Goodanuff presiding.  (After Judge is seated) You may all be seated.

Judge:  We are ready to hear Case number 45296:  The State versus Gill Teeman.  Are both parties present and ready to begin?

Defense Lawyer:  Yes we are, Your Honor.

Prosecution: We are also, Your Honor.

Judge:  The prosecution may now make their opening statement.

Prosecution:  Thank you, Your Honor.  Ladies and gentlemen of the jury.  This morning, the great state of Arkansas intends to prove beyond a shadow of a doubt, that the accused is indeed guilty of the horrific crimes that he has been accused of.  We further intend to prove that he is deserving of the most severe punishment possible.  Thank you.

Judge:  The defense will now make their statement.

Defense:  Ladies and gentlemen of the jury, there has been a travesty of justice here.  We intend to prove that the accused is not only not guilty of the crimes which he has been accused of, but is instead, to be praised for his actions.  Thank you.

Judge:  Gill Teeman, will you please rise and face the court.  Mr. Teeman, you stand accused of breaking and entering, kidnapping, and intent to do severe bodily harm to another individual.  How do you plead?

Gill:  Not guilty, Your Honor.

Judge:  Be seated.  The prosecution may now begin.  Call your first witness.

Prosecution:  The prosecution calls Gill Teeman to the stand.

(Gill Teeman takes the stand.  Bailiff places Bible in front of him and says…)

Bailiff:  Do you swear to tell the truth, the whole truth, and nothing but the truth, so help you God?

Prosecution:  Mr. Teeman, I am going to ask you a series of questions.  I want a simple yes or no answer.  Do you understand?

Prosecution:  Very well, then, let’s begin.  On the evening of August 14th, did you kick down the back door of the house at 2493 Morning Glory Lane, and then enter that residence?

Prosecution:  Is it correct that there was no one else in the house?

Gill:  No, there was a young girl upstairs.

Prosecution:  After entering the house, did you go up the stairs in search of the young girl.

Prosecution:  After locating the bedroom of the young girl, did you enter it?

Prosecution:  Did she scream.

Prosectuion:  And did you walk over to her and place your hand over her mouth.

Prosecution:  And then you picked her up and hurried out of the house as fast as you could?

Prosecution:  Did she want to go with you?

Prosecution:  And then you placed her laying down in the back seat of your car and drove off.

Prosecution:  We will hear testimony later that you were seen driving erratically and at a very high rate of speed.  Is this also true?

Prosecution:  You then took her to a large building and found a vacant room, where you turned her over to another man.  Is that true?

Prosecution:  And then you stood by and watched as that man plunged a very sharp knife into her abdomen.

Prosecution:  And you approved of this?

Prosecution:  And you were totally aware that this would be painful for her?

Prosecution:  Later, we will hear testimony that you left the building without the young girl.

Prosecution:  Do you feel any remorse for your actions?

Prosecution:  That is all for now, Your Honor.

Judge:  The accused may step down.

The play is presented by volunteers who play the roles as they read from the script.  All of the others in the room are the jury.

At the end of the play, I ask the jury to deliberate and come to a verdict in the case as presented.  Is Mr. Teeman guilty or innocent?  Usually the result is a resounding guilty.  That is when I introduce the rest of the story.

You see, there were some extenuating circumstances that were not brought forth during the court proceedings.   Yes, Gill did all those things he is accused of.  However, there is one small, key piece of information that you need to be aware of.   The young girl in the story was suffering from an appendicitis attack and was in dire need of medical attention.  Gill is a police officer who received the call and rescued the young lady suffering in great agony, and rushed her to a hospital where a surgeon sliced her open and saved her life.  The story suddenly changes completely.

Scripture describes the love of God as perfect and complete.  His chosen people, Israel, defied Him repeatedly, deliberately refusing to bow their stiff necks in reverence and respect for what He had accomplished on their behalf.  God was ultimately patient with them in their repeated refusals to honor Him, and as a result, we can see from the Biblical account, the character of God in action.  His merciful, kind and longsuffering nature did not destroy Israel even when they probably deserved such treatment.  The honest individual will admit that their own behavior is, at times, just as abhorrent to God, and is deserving of judgment.  We owe our lives to the fact that He is slow to anger.  However, a line does exist over which a child of God should not cross.  Where that line is technically, only God knows.  The patience of God does have a limit, and we would do well not to test that limit.  The prophet Habakkuk explored a concept we will call “the dark side of love”.

God had chosen Israel as His people and His covenant with Abraham would not be ignored or vacated by Him.  But they were sinning greatly and sin left unattended will ultimately lead to death.  In His sovereignty, God chose to salvage His people with love—the dark side of love.  No parent enjoys punishing a child, and neither does God find pleasure in disciplining His children.  The necessary reprimand is meant to admonish and correct a bad behavior.

Habakkuk was a curious prophet, a man of many questions.  His inquiries are relevant even today, and worthy of a closer look.  He understood God’s relationship with Israel, but as many today in our world wonder, how can God permit sin to continue and not be dealt with?  It seemed then, as it does now, that the ungodly go along in life unchecked, able to do as they please, and the righteous suffer at their hands.  God’s solution to the uncaring, wandering hearts of His people was a nation called Babylon.  Habakkuk was informed that the Chaldeans would become a world power, the greatest the world would ever know, and they would be His tool of judgment upon His people.  The prophet then points to the fact that the Babylonians were a ruthless horde.  It seemed unconscionable that Jehovah God would raise up a godless nation to judge His own people.  But God reminded him that Babylon, too, will be judged for her sins, eventually.

The book of Habakkuk, though short, is quoted by the great theological books of the New Testament.  Romans, Galatians, and Hebrews refer to passages found there as proof texts, to support the challenges Paul put forth to the Jews and Gentiles that Jesus was the Christ, and that the ultimate plan of God was the salvation of all men.  Habakkuk, by the direction of the Holy Spirit, records an amazing claim in chapter two, verse five.  The just shall live by his faith.  Our salvation is not found in our observance of rules or regulations.  It is to be found in a child-like faith in Jesus Christ, and a belief in what He did on the cross many years ago.