In the beginning God created the heavens and the earth.  Genesis 1:1

God created the universe and everything that is.  He spoke it all into existence from nothing and continues to hold it all together.  To say anything else is to disbelieve Genesis 1.  I will not throw out any part of Scripture simply because science may not agree at the moment.  In time, Science will be shown to be wrong and the Bible will continue to be correct.  The fact is, Peter warned that the thought of creation would be a central focus of controversy in the end of days.  Because, if we admit that God is who He claims to be, then we must worship Him.  Satan will not let that idea go unchallenged. 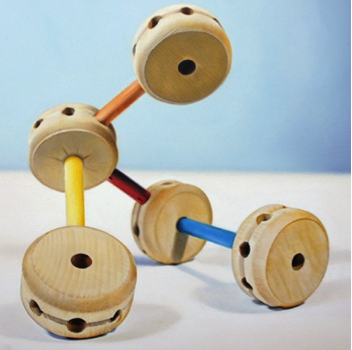 Mathematical probability is a strange and wonderful science.  We would do well to understand it better.  We decide many things in life based upon probability, with no comprehension of what the actual chances are.  We accept a simple guess and move on.  Many people will buy a mega-lottery ticket and have a secret hope of maybe winning, and yet not one of them is worried of being struck by lightning this year.  They are 7 times more likely to be killed by lightning than win the mega-lottery.  We see things the way we want.  Our minds are made up even before we realize that they are.

Here is a little magician’s illusion you can try.  Believe me, this is worth taking the time to demonstrate to yourself!  It is shows the power of the mind to believe, even when we know it can’t be true.  Take three decks of playing cards, still in the box.  Remove the cards out of two of the boxes, and stack the empty boxes on top of each other.  Then place the last box, still filled with cards, on top of the pile, aligning them nicely.  Using your thumb and two fingers, pick all three boxes and lift them straight up about 6 inches or so.  Place them back down, and now just pick up the top box.  No matter how you try to tell yourself it cannot be so, the single box feels significantly heavier than the three together.  Try it again and again, and your mind will be screaming the same result.  The single box feels heavier!  Even though you know beyond a shadow of a doubt that it just cannot be true!

Evolution is, in reality, based on probability.  The theory says that there is a chance that changes could occur and we could see gradual change from one creature to another.  And yet, none of those intermediate creatures resulting from gradual changes can be found.  As we begin to understand DNA and the intricacies there, we find the probabilities become astronomical.  Most serious DNA scientists have left the theory of evolution behind long ago.  Our institutions of learning have not caught on yet.

The process of changing from one type of animal into another by the evolutionary process is not just a single step at a time possibility.  There would have to be moments of many small changes for one species of creature to convert to an entirely different, and new creature.  Those movements seem simple to our unscientific minds, because they look so minuscule and insignificant, but they would require hundreds, or even thousands, of very small changes to occur simultaneously.  Let me put that into perspective for you.  If I were to describe a human male and list 200 minor characteristics, such as a scar location, language dialect spoken, exact height in millimeters, exact weight in milligrams, his father’s first name, what he ate for breakfast on his fourth birthday, etc.  I could give you a fairly detailed description of a mythological person.  The probability of that exact person ever existing in history on this earth with those exact 200 characteristics is astronomical.   It is the equivalent of covering the entire state of Texas with silver dollars 3 feet deep, painting one red and hiding it, and then allowing someone to fly over the state with a helicopter and pick one dollar.  And evolutionary theory says that probabilities of that dimension happened as commonly as you could imagine.  I don’t have that kind of faith in scientific theory.

In Second Peter, God tells us that the truth of creation will be challenged by the world.  I find it fascinating that the Bible addresses this very issue in this fashion.  Peter also mentions the flood.  These are two key moments in Biblical history that science essentially denies ever happened, and yet God stands by His account, and challenges us to have the faith to believe He has done what He said He has done.