Without Christ in our life, we are spiritually blind.  There is so much going on around us in the unseen spiritual world.  Paul referred to a raging battle.  At the point of Salvation, the Bible terms it as being born again, we become spiritually alive in Him and are from that point aware of an entirely new dimension of life. 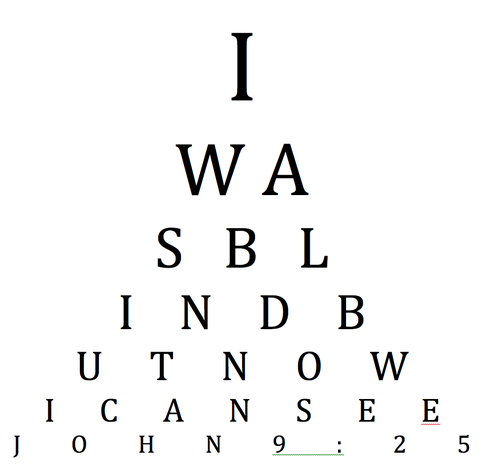 John’s Gospel has only 21 chapters yet he devoted an entire chapter to the story of Jesus healing a man who was congenitally blind.  I did the math, and that comes to 5% of his account of the life of Jesus is there in Chapter 9.  That, I believe, makes this episode significant.  The details recorded there are unique in many respects and worth a closer look.

In context, we discover that just previous to this moment in time, Jesus had faced an angry mob intent upon killing him and He walked right through them and left them behind.  He had spent some time explaining to all who were listening that He was The Light of the world.  But for light to be seen and recognized, there must be those with the ability to see.  I recall a story I was told once of a coal mine explosion which trapped several miners in total darkness for a period of time.  Crews rushed to rescue the men and succeeded to getting a light into the small area where the men were located.  One man was heard to ask the question, “Why don’t they turn on the light?”  That was the moment that they all realized that he had been blinded in the explosion.  In the dark, without light, he had no idea that he was blind.  Spiritual blindness is quite similar.  The world is full of people who do not know that they cannot see.

As the account begins, we find Jesus interacting with the man.  This is the only account in Scripture of Jesus healing a man who is stated to have been born blind.  The community was aware of the fact of his blindness from birth and a discussion began among the disciples as to why he was born that way.  The possibilities included a common Jewish belief that stemmed from a verse in the Bible that the sins of the father would be visited upon his children  (Exodus 20:5).  Many of the Jewish rabbis also believed that a child could sin while yet in the womb.

When questioned about the truth in this mater, Jesus responded a bit differently than they probably expected.  He said it was ultimately for the glory of God that this had happened.  That does not mean that this gentleman was some kind of spiritual guinea pig destined to be an experiment of some kind.  His blindness was imposed by a sovereign God, who would now receive glory as He performed a miraculous healing upon this man.  We must not miss the simple but profound truth that we are not here for anything that we can do or accomplish.  We are here solely for the purpose of God’s glory.  We were created to bring glory to God in whatever method God chooses to use us.

One of the most interesting things to note concerning the stories of miraculous healing in the Bible is the variety of methods God used.  I have seen many so-called “faith healers” peddle their technique with seemingly astonishing success.  It fascinates me that all of them use but one or two of the methods that are recorded in the Bible for healing.  If they are going to be Scriptural about it all, why not use the “other” ones as well?  Perhaps they don’t work as efficiently?

I find this healing fascinating.  There seem to be so many odd things going on here.  I believe there is a reason for each strange behavior.  (1).  Jesus made mud with spit and put it in the man’s eyes.  Jesus had just claimed to be the Light of the world—God—and now Diety touched this man with the very real physical hands of a man.  Jesus is 100% God and 100% man.  (2).  He had touched this man and had given him a command that he must obey if he wanted to see.  (3).  John made the point of giving us the name of the pool, Siloam, and even translating its meaning for us.  It meant “sent”.  Even in the name of the pool we find mention of the truth that Jesus was sent by the Father to bring us the Light.  And finally (4).  the water of the pool represents the Word of God.  It wasn’t until he applied the water and washed off the mud that he could actually see again.  God’s Word is a key, integral part of salvation.  It brings us to the point of conviction and is an important part of the entire process of giving us spiritual sight.

He was miraculously healed and eventually brought before the religious leaders of the day and asked about his healing.  His reply, “I was blind but now I see!”  They asked him repeatedly how this had all come to be and he told them the same story each time.  God must have sense of humor, because the healed man answered them in a priceless way.  Finally in exasperation he replied, “I have told you already and you did not listen. Why do you want to hear it again? Do you want to become his disciples too?”  I can just see the anger in their red faces as they responded to this little jab.

And we cannot miss the final scene in this episode of Jesus’ life.  After all of this has transpired, Jesus went looking for the man.  You see, up until now, the man had not actually seen Jesus.  It is significant that Jesus went to him.  God comes looking for us.  And when He found the man, Jesus asked him the most important question of his life, “Do you believe in the Son of God?”  The man’s answer was a resounding yes.  It is a very sweet moment we are observing here—Jesus leading a man to salvation.  It is a moment that we should never forget.