In His Grip
(Salvation)
(Eternal Security)

We do not hold our own salvation in our hands.  We cannot keep it or contain it or guarantee it.  Only God has that ability.  We are held in His hands, and He guarantees that He will never let go of one of His children. 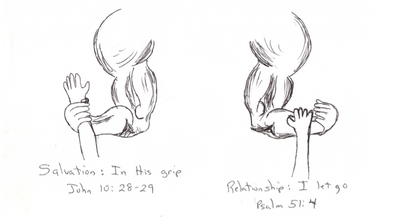 Many years ago I attended church with an elderly couple. Robert had stories of World War 2 that were fascinating. He had been aboard the USS Indianapolis when she went down with nearly 1,200 men on board.  300 went down with the ship, 900 went into the water.  No one knew they had gone down for 3½ days.  Only 317 people survived that ordeal.  One word:  sharks.  He was one of those lucky few.  In total, he went into the water 3 times when the ships he happened to be on were torpedoed during WW2.

Sue was one of the sweetest people you could ever hope to meet.  I appreciated her Christian demeanor and life.  As time went on, I learned to know both of them as friends.  Once in a while, there was something new about them that I would become aware of, and I was young and inexperienced at the time, and treasured their knowledge of life and circumstances.  One small character trait has stuck with me all of these many years since.  And every time I think of Sue, I remember this little bit of information.  Whenever she would write a letter, and yes, I am old enough to remember when people used to write letters, she would always end her letters with the same closing remark.  Where most people might pen, sincerely yours, or love you, she would invariably write, “In His grip, Sue.”  She understood well the passage in John 10:28-29, that her salvation was not in her control.  God was holding on to her, not the other way around.

I have met many people over the years who are convinced that if they follow the commands of God, it they do enough good in the world, that at the end, the balance scales of good and bad will be tilted in their favor and that God will be obligated to allow them into Heaven.  It does not work that way.  God is so holy and so perfect, we fail to appreciate or even comprehend just how incredibly far beyond us His standards are.  Scripture uses the analogy of comparing the best we can ever hope to do as simply filthy rags compared to God.

I used to have a pet raccoon.  For 14 years he was kept in a cage, but I would take him out and handle him quite a bit, so he was tame and loved to be around the family.  We kept a litter box in his cage for his personal use and he did so flawlessly.  But he was an animal and a bit messy, so from time to time I would grab a rag or two and a bottle of cleaning disinfectant spray and I would wipe down his cage completely from top to bottom.  I used white cotton rags in the shop, so they were my cleaning tool of choice.  After a thorough scrubbing those white rags looked hideous.  Examining them closely, you would see bits of old food, raccoon hair, raccoon pee and raccoon poo.  They were absolutely disgusting.  I would save one every time I would give this lesson and place it in a plastic baggy to take for show and tell when I came to this point of the lesson.  The very, very best that I can do on my very, very best day is like that rag, compared to Gods perfection.

Our only hope is that the righteousness of Christ has been imputed into our lives and that perfect righteousness is what allows us entry into eternity with God.  In Psalm 51, David understood that if his salvation was based solely upon his personal ability to maintain fellowship and a relationship with his God, he was doomed to failure.  God called him a “man after His own heart”, and yet David had failed miserably so many times.  God holds us, we do not hold on to Him.  The creator of the universe has a tremendous grip.  I, like Sue, am comfortable being in His grip forever.