No one has ever seen God, but the one and only Son, who is himself God and is in the closest relationship with the Father, has made him known.  John 1:18 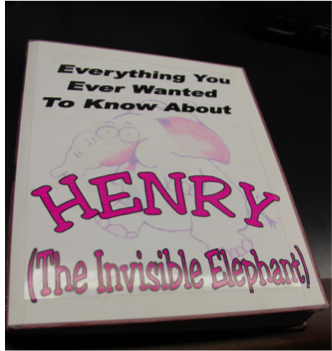 ​The spring loaded landing pad is a very simple wooden box with a hinged floor.  Beneath the floor is a spring strong enough to fling all of the foam up into the air when triggered.

(The lesson begins as I struggle to pull “something” into the room, much like a mime might pull something invisible.  It is uncooperative and I am barking commands constantly to “it”.  We walk through the group, moving people out of the way, giving “it” a fairly wide berth.  We finally arrive on the other side of the room, where I ask an adult nearby to hold the invisible leash for me while I teach the lesson.)

Good evening ladies and gentlemen.  You may be wondering what this was all about.  It is all about invisible elephants.  You see, I own one.  And his name is Henry.  Henry the invisible elephant.  You may be wondering how I came to own an invisible elephant.  That is an interesting story.  It all began several years ago when I was camping with my wife out near the lake.  I had a nice fire going and there was a bit of a chill in the air.  It had been dark for about an hour or so, and my wife went into the camper to take care of the dinner dishes.  I heard a rustle in the leaves across the fire from me.  I peered into the darkness to see what it was coming toward me.  All I knew is that it sounded big.  And then, there he was—Henry, I mean.  I couldn’t see him, but I sure could smell his peanut breath.  It was cold, and he was just looking for some warmth.  So I let him sit near the fire all evening long.  I never mentioned him to my wife though.  I was afraid she wouldn’t understand.

Later that evening, Henry disappeared.  The next morning, we had to pack up and leave for home.  As we drove off, I sensed Henry was following us, so I drove a little slower than normal, so that he could keep up.  Well, he followed us home and has been living at our house ever since.  My wife still doesn’t know, so don’t tell her, OK?  He lives under the front porch.  He doesn’t eat much.  Invisible elephants aren’t as large and regular elephants.  I even bought this book at the pet shop.  It has everything you could ever need to know about invisible elephants—their care, feeding, health issues, and grooming.  I have found it very handy.

I am fully aware that some of you do not believe in invisible elephants, because you have never seen one.   They’re invisible, DUH!  So here’s what I am going to do.  It is my goal to prove to you that Henry is real and is right here in this room.  I have taught him a wonderful trick.  He is going to climb to the top of this 6-foot ladder, and then on cue, leap through  the air and land squarely in this box full of foam.

(At this point, I walk over the adult “holding “ the leash, and thank him for his help and I then lead Henry down to the ladder.  I begin narrating excitedly his progress as he climbs the ladder.  When he finally reaches the top, I have the group countdown to zero, and Henry jumps trough the air and the box explodes in a shower of foam blocks.)

So let me ask you, is Henry real?  Most, if not all of you will say no.  And yet look at the evidences you saw here tonight.  You watched as I pulled something into the room and walked it right through the middle of you.  Many of you had to get up to let him pass by.  Then I had this gentleman hold his leash for some time.  Do you think he’s crazy too?  I showed you a book all about the care of invisible elephants.  And then I walked Henry to the ladder and you watched as he climbed the ladder and then you saw the explosion when he landed.  All very convincing proofs, if you ask me.

OK, I’ll grant you, Henry the invisible elephant is not real.  He is merely a figment of my imagination.  But I will stand here until the day I die and proclaim to you that God is very, very real.  You cannot see Him, but if you look carefully, you can see the results of Him having been at work.
PDF of Lesson