Jesus said, ‘Make the people sit down.’ There was plenty of grass in that place, and they sat down (about five thousand men were there). 11 Jesus then took the loaves, gave thanks, and distributed to those who were seated as much as they wanted. He did the same with the fish.  John 6:10-11

The Bible clearly tells us that Jesus did many miracles during His 3 year ministry.  They served often as a sign to those watching Him that He was indeed who He said He was—The Son of God, the Messiah.  Is spite of the miraculous signs and wonders, there were doubters and also those who were jealous of His rise to prominence.

This is an illusion, a magic trick, as it were, and requires a few custom made items.  There may be somewhere to buy this as a kit, but I am not aware of it.  I made my own.  Basically the trick works in this fashion.

The bucket is placed on the special wood stand, and has a false, removable bottom.  This allows you to reach through the bottom of the bucket into the wood stand, grab handfuls of crackers and goldfish and give everyone a small snack.  The drawing below gives you an idea of how this works. 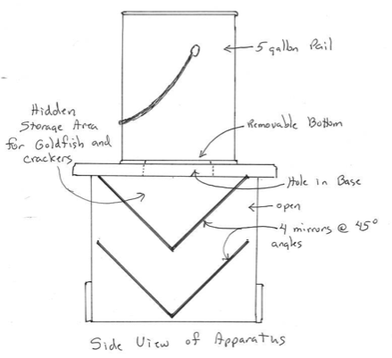 Typically, I simply go through the Bible passage, explaining what happened and why.  When I get to the part about the two fish and five loaves, I show the class the empty bucket, proving that it is indeed empty.  Its false bottom has been cut but the cut is not perceptible.  This is accomplished by using 2 metal buckets.  They usually have circular ribs in the bottom, allowing you to cut the hole in the bucket just inside a rib and cut the “removable bottom” from a second bucket just outside the rib.  It gives a very clean look to your gimmicked bucket.  I then dramatically drop two goldfish and five oyster crackers into the empty bucket.  I place it on a table and then “realize” that it needs to be higher, so I casually grab the mirrored stand that “someone” left in the corner, put it on the table, and place the bucket up on the stand.  Now everyone can see.  I will make some kind of motion in the mirrored area, like waving or something to draw attention to the fact that you can see through the stand.  The Bible story continues to the end.  I will then reach down into the bucket, move the false bottom to the side as inconspicuously as possible and begin pulling goldfish and crackers out of the bucket, easily enough to give the entire group a nice snack, with some left over.


The miracle that we commonly reference as the Feeding of the 5,000 is the only miracle recorded in all four Gospels.  That makes this episode in the life of Jesus intriguing.  You must read all 4 accounts to get the entire picture of the events that transpired that day.  We are told that 5,000 men had followed along the shore to the deserted place where the disciples and Jesus were.  Add a woman and a child or two to each and the total number present for this miracle was probably closer to 15 or 20 thousand people.  Stop and consider the entire population of the immediate area, and you will realize that there is a significant percentage of the total population present to witness and partake of this miracle.

Jesus and His disciples watched the oncoming crowd and Jesus asked for advice on how to serve these people a meal.  He actually did not need a recommendation, but was getting the disciples ready for a teaching lesson.  Their response was that this was an impossible task to see through to completion.  Jesus had a solution all along, but waited patiently as the disciples worked their way through the whole scene before them.  They are about to see that nothing is impossible when Jesus is involved.

There are times in our lives as well, when God may purposely place an obstacle in our way to cause us to reason and think through a situation.  I think of the story of Job as a prominent example of that scenario.  God allowed unimaginable things to happen to Job and his family—all to teach Job, and us, that God is sovereign and we are not.  We would do well to see the challenges that we face as teaching moments, an opportunity to develop a better understanding of God firsthand.

They found a little boy carrying a small lunch bag with 2 fish and 5 loaves of bread.  Of the 15 to 20 thousand people there, only one little boy came prepared for the day.  And he was willing to give what he had for Jesus to use.  Are we as prepared and as willing to give of what we have?  This is a picture of remarkable generosity, and the faith of a little child.

Jesus told His disciples to have the entire crowd seated in measured groups of 50’s and 100’s.  That may seem a bit odd from our perspective, but God has always shown attention to orderliness.  And this may well be a nod to the Old Testament Law found in Exodus 18 where Moses divided the people of Israel into 10’s, 50’s, 100’s, 1,000’s, and 10,000’s.  All through creation we find order and structure.  His attention to even the finest of details is incredible.  An aerial view of this gathering would have been quite a sight to see.  I have seen a stadium filled with 20,000 people seated in an orderly fashion.  This would have been much better.

Mark mentions the small number of loaves and fish several times over, but we find that Jesus was not concerned in the least by the numbers.  He knew what He was about to do.  There was going to be a very important lesson that would not be completely grasped by His disciples.  In a few days, He would feed 4,000 on another hillside, and He would remind them of this day as well during their teaching time afterward.

Jesus then held up the bread and fish and blessed the food.  As He began to break the bread into fragments, He handed them to the 12 disciples to distribute to the crowd.  Then He took the fish and divided it among them all.  The wording of that last phrase suggests that Jesus may have personally handed out the fish to each person present there that day.  The Creator of the universe performed the simple task of a servant, by handing each person in attendance that day his or her portion of fish.  It would have been a very personal, touching moment for everyone there.

And after everyone was completely filled to the brim, the disciples gathered up 12 baskets full of fragments of bread and fish.  My question is immediately, “If Jesus is who he says He is, and can do all of this miraculous stuff, why is He so bad at estimating the amount of food that would be needed?  Why the leftovers?  In a few days, He will do nearly the same miracle again, only with 4,000 men, and then he estimates a bit better, but still has 7 baskets of food leftover there.  Why?”

Jesus discusses the leftovers with His disciples in the eighth chapter of Mark.  He is almost exasperated with them for their dullness and inability to understand.  He hints that the huge amount of leftovers occurred so that they, as well as everyone else who witnessed those miracles, would notice and remember that Jesus was able to provide all that they could ever need.  They would not have to spend their lives worried or concerned about the small things of everyday life.  God would provide.  Our focus today needs to be on furthering His kingdom here on earth by doing what He has called us to do.  The small details will all work out.  God handles them just fine.