Now I want you to know, brothers and sisters, that what has happened to me has actually served to advance the gospel.  Philippians 1:12

God has not promised Christians that our lives would be defined as a bed of roses.  The reality is, He has warned us of quite the opposite.  Our lives will be filled with suffering, because Christ suffered for us.  But those heartaches and headaches that seem to fence us in have a divine purpose.  God uses the tough times in our lives to further His gospel—if only we participate willingly.  Paul’s life as an Apostle to the Gentiles reminds us of how much difficulty can come our way.  But his reaction to those difficult times was to freely admit that God was in control and that those troubling times always resulted in the expansion of God’s kingdom. 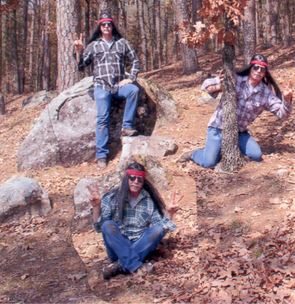 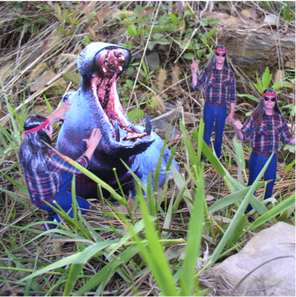 The PowerPoint is simple to make, but requires a little bit of silliness on your part.  The Four Hippies are a recurring character for me.  They show up doing all kinds of strange and wonderful things.  I bought a long hair gray wig at a local party supply store.  A red bandana and pair of sunglasses and the outfit was complete.  I then had a friend take numerous photos of me in various poses.  Twenty or so photos later, all taken from approximately the same distance, the camera hard drive was uploaded to my computer and each picture printed on glossy photo paper.  I carefully cut out the silhouette of my photo from any background, attached a small stick or other fastening device and I had characters that I could place in still shots and use in many stories over the years.  Printing animals and other items allow for an infinite number of settings that can be created very easily.  The characters are placed into normal landscape settings with the camera very close in and a photo is then taken of the scene.  The photo on the right was from an episode where the Four Happy Hippy Hippo Hunters went on a hunt in the outback of Australia searching for the elusive Australian Land Hippo.  The same results could be manufactured using a photo editing program, but I found this easier and, overall, less time consuming for me.

An in-depth study of the life of the Apostle Paul is an amazing one.  It doesn’t take long to realize that this man was subjected to intense suffering.  When he was called by God, he was warned that a life of difficulty awaited him.  (Acts 9:16)  He took on that responsibility with a confidence that is hard to imagine.

In the book of Philippians, we find him in Rome in prison, chained between guards, and facing the extreme hardships of his situation.  He writes to his friends that the things that have happened in the past, and are currently still happening to him, are there to advance the Gospel.  The word translated as “advance” in this verse is translated “furtherance” in the KJV.  It is a word associated with the Roman army of that day.  As the army would advance across a country, there usually were not adequate roads upon which they could move a massive Roman army and machinery and supplies.  Often trees obstructed the way and needed to be cut down and removed.  The word translated as “advance” here is the same word used to describe the job of those Roman lumberjacks.

Paul is telling the Philippian believers that his predicament made him a Divine Woodcutter in God’s program.  He is sandwiched between two guards day and night, who would have no doubt talked to their captive and then shared their stories with the Praetorium guard of 10,000 hand picked Roman soldiers.  He would eventually testify before Caesar himself.  What an audience—that might not have ever been reached were it not for Paul’s willingness to suffer for the cause of Christ.

The difficulties in our lives, the hardships that hedge us in, the handicaps we face—they are all divine woodcutters, clearing the way for us to share the Gospel.  Paul wrote, “Most gladly then will I rather glory in my infirmities, that the power of Christ may rest upon me.”  II Corinthians 12:9