Now Thomas (also known as Didymus), one of the Twelve, was not with the disciples when Jesus came. 25 So the other disciples told him, ‘We have seen the Lord!’  But he said to them, ‘Unless I see the nail marks in his hands and put my finger where the nails were, and put my hand into his side, I will not believe.’  26 A week later his disciples were in the house again, and Thomas was with them. Though the doors were locked, Jesus came and stood among them and said, ‘Peace be with you!’ 27 Then he said to Thomas, ‘Put your finger here; see my hands. Reach out your hand and put it into my side. Stop doubting and believe.’  28 Thomas said to him, ‘My Lord and my God!’  29 Then Jesus told him, ‘Because you have seen me, you have believed; blessed are those who have not seen and yet have believed.’  John 20:24-29

A Newspaper
Small Amount Of Sodium Polyacrylate
A Glass Of Milk 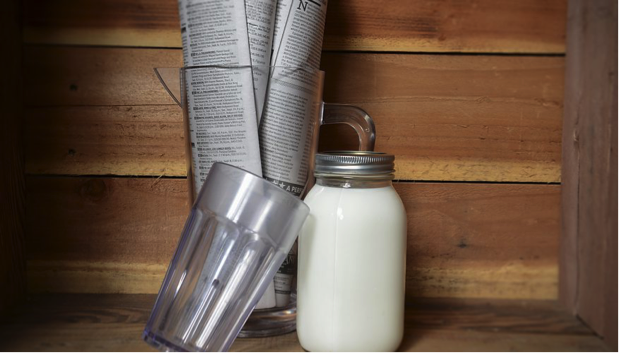 This is based on the classic “pouring milk into a rolled up newspaper” illusion.  Most everyone knows it is done with a gimmicked pitcher.  So I change it up a bit.  I tape a small plastic bag with sodium polyacrylate powder in it to the inside of the newspaper, where I can get to it easily after I roll the paper up into a funnel shape.  I fuss around just a bit getting the inside of my cone opened to receive the milk, but what I am actually doing is getting the mouth of the bag open so I can pour the milk into the bag.  I then take the glass of milk, hold it high enough above the newspaper funnel so everyone can see there really is milk going into the paper, and I pour the entire glass out.  I then simply hold it while I give my talk about doubting, letting the powder do its work.  I may even add some chocolate syrup and stir just to make sure the powder is absorbing everything well.  At the end of my talk, I casually mention that I really don’t care for milk anyway, and lay the paper down on a table, flatten it out with my hands, and leave it lying there.  A cup of milk, fully absorbed into sodium polyacrylate powder, can be smashed quite flat with no ill effects or leaks.  Practice this before hand to get the powder to milk ratio right.  Sodium polyacrylate powder is the chemical in baby diapers and can be purchased online through a variety of outlets.


I have brought with me a copy of today’s newspaper.  The headlines were pretty boring, so I thought I would make it a bit more interesting for you.  I also brought a cup of milk, but I don’t care for just plain milk.  It needs a good shot of chocolate.  And then we stir.  Let me roll this newspaper up into a funnel about this size.  And then I would like to take this cup of milk and pour it straight into the newspaper funnel.  That should do nicely.  Now, remember what you just saw me do.  We will talk about what you watched me do, at the end of today’s lesson.

You have watched carefully as I rolled up this newspaper, and then you probably smiled a bit when I pouredthis glass of milk into it.  You kindly listened to what I had to say about doubt, as I held this in my hand the entire time.  But right now you need to be asking yourself, “Did I really see him pour that milk into the paper?  I thought I did…but…”  You just watched me flatten out the paper on the table.  And deep inside you, you understand that is impossible.  And yet, you were pretty sure that was really milk in that glass.  Or was it?